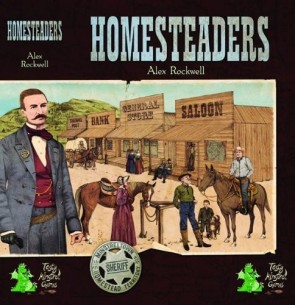 The Homestead Act of 1862 allowed Americans to claim 160-640 Acres of undeveloped land by living on and farming it for 5 years.

Also in the 1860s the Transcontinental Railroad was built across North America, linking rail networks between the east and west coasts. The development of the railroads accelerated the spread of Homesteaders colonizing the west and lead to the rapid cultivation of new farm lands.

Become a Homesteader with a new claim and help develop a Township into a thriving City! The player who contributes the most will be declared the winner and have the city named after them!

Homesteaders is an auction and resource management game in which players bid on the right to build certain types of buildings, and then build their desired building of that type. Each round features an income phase, where players acquire resources, and an auction and building phase, in which players bid for available land, and then spend their resources to develop a building on that land.

The game is played over 10 turns, made up of 3 stages. Turns 1-4 comprise the Settlement stage, turns 5-8 comprise the Town stage, and turns 9-10 comprise the City stage. The buildings which are available for development vary through the stages, as buildings that were important when the settlement started, such as Farms and Markets, are no longer needed and new buildings become important as the city grows, such as a Train Station and Railway Terminals.

After the final round is over and the City is built, players assess their contribution by counting the victory points earned during the game, as well as bonuses from buildings they have in play, and subtract a penalty for unpaid debt. The player with the largest score has contributed the most to the thriving city, and will then lend their name to it as well, as they are declared the winner of the game!