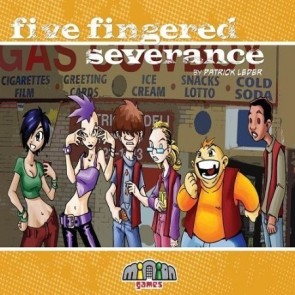 Today is your last day on the job. Corporate decided to close the store and everybody is getting the boot. You could spend the rest of the day helping those miserable, wretched wastes of human skin who come in and demand service, or you could do what you always wanted - tell them were to go and have a good time. And you know which one it’s going to be...

In Five Fingered Severance each player assumes the role of one the characters at the store. They can steal items from the store, slack off, or keep performing their work duties. Each activity has risks and rewards. The player scores points after successfully slacking off and after taking their stolen goods to their locker. When a player gets caught (by the boss) doing something wrong they gain heat. Heat also naturally rises during the game. When a player reaches 30 they are fired. The game ends when all of the players but one are fired or the event deck is exhausted.

Five Fingered Severance is a take that game. To gain points the players will have to open themselves up to the other player's attacks.