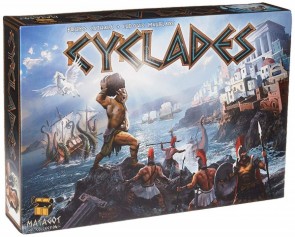 With the blessing of the Gods of Olympus and the support of Mythological Creatures, recruit troops, build ships, create fortresses and construct metropolises. The struggle to bring your people to their highest glory will be legendary. With Cyclades, Bruno Cathala and Ludovic Maublanc (Mr. Jack, Dice Town) reinvents development and conquest games. In a ninety minute game, live through an incredible adventure in which soldiers, philosophers, mythological creatures and gods are common.

October 22, 2019
Rating
5.0
W
WadeMonnig Top 10 Reviewer 195 reviews
Comments (0) |
April 02, 2020
Rating
4.0
Another fun and well balanced hybrid. What's particularly noteworthy about this is the way in which conflict is used as a threat to drive the play rather than being a factor in and of itself: because you need to spend at least 2 turns lining up an attack it's not hard to prepare a defence of some sort so actual battles are fairly rare. But you still get plenty of interaction & metagame because players have to respond to the *threat* of attack yet the game as a whole stays balanced. Excellent production values and plenty of variety. Big downside is that early quarter of game is quite dull as there's no value in early conflict and all the gods are valuable so auction lacks tension. But it certainly comes alive later on!
MT
Matt Thrower #1 Reviewer 286 reviews
Comments (0) |

Rating
5.0
Already have an account? Log in now or Create an account
May 25, 2019
Rating
5.0
Perfect bidding game, if you like tension. Don't expect DOAM. If you want more fights, get the expansions.
N
Nodens Top 50 Reviewer 31 reviews
Comments (0) | Was this review helpful to you? 0 0
Discuss this article
Log in to comment
Posts in discussion: Cyclades

Battlestar Galactica: The Board Game
4.0
G Grudunza
"Full article here: http://fortressat.com/index.php?option=com_myblog&show=BSG-A-really-awesome-game...-except-when-it-kind-of-sucks..html&Itemid=240 In a nutshell, depending on..."