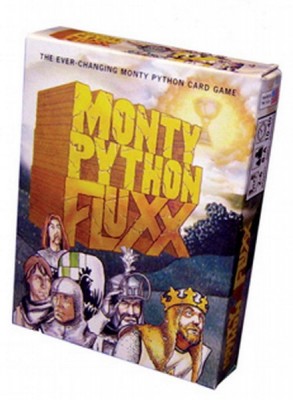 Yes, that crazy card game where the rules keep changing has joined forces with Monty Python to create the Looneyest card game ever! Help King Arthur and his Knights find the Holy Grail. Bring a Shrubbery to the Knights Who Say Ni! Lob the Holy Hand Grenade at the Killer Rabbit with Nasty Big Teeth! Just do it quick, before the Goal changes again!

If Fluxx wasn't confusing and strange enough, now the Pythons have gotten involved with the proceedings and made it even more hysterical. Monty Python Fluxx now includes singing, fake accents, reciting Python dialog for extra cards, and pretty much everything else, short of farting in your general direction. (It is, after all, a game for the whole family.) Loosely based on concepts from Monty Python and the Holy Grail, there are guest appearances from King Arthur and all of his Knights, coconuts, a shrubbery, an unladen swallow, a trojan rabbit, a catapult, an airborne cow, the Holy Hand Grenade, and the Finger of God, as well as such Python classics as the giant foot, the nude organist, a resting parrot, and the Spanish Inquisition - which, of course everyone was expecting.

With tons of Holy Grail material, and a healthy smattering of references from Flying Circus and the other movies, this should be a riot for anyone who knows even a little about Monty Python. Fluxx is the perfect medium for the show that brought us Something Completely Different at every turn.