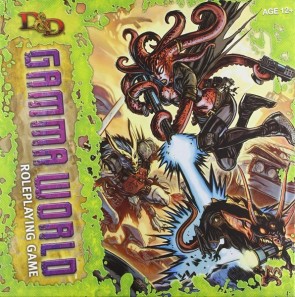 Earth. After the apocalypse. Never mind the radiation—you’re gonna like it here.

The D&D® Gamma World™ Roleplaying Game offers hours of rollicking entertainment in a savage land of adventure, where the survivors of some mythical future disaster must contend with radioactive wastes, ravaged cities, and rampant lawlessness. Against a nuclear backdrop, heroic scavengers search crumbled ruins for lost artifacts while battling mutants and other perils.

This product is a complete, stand-alone roleplaying game that uses the 4th Edition D&D Roleplaying Game system as its foundation. It appeals to D&D players as well as gamers interested in fantasy science fiction set in a bizarre, post-apocalyptic world.

Rating
3.5
Already have an account? Log in now or Create an account
A nitro-burning funny-engine...
August 16, 2019
Rating
3.5
...that will take your imagination from zero to 300 mph just short of the quarter-mile before you blow a tire as the chute deploys, angling you up into the stands.

A great setting, just the thing for some weird-science/low-comedy action. Though I am bummed they got rid of Fat Cell Accumulation as a "power":

4th Edition D&D isn't D&D to me, but I have no such connection to Gamma World—hopefully the rules set will work just fine for this.

UPDATE: Works better than great. Truly effortless to play sans maps and minis, if you're worried about that (I was). Character generation is a fun group activity all by itself; you start with two descriptors—"Radioactive Yeti"—and have to fill in the massive blanks. Also, your initial armor & weapons are generic in nature—armor is light or heavy, weapons are one- or two-handed melee and ranged—it's on you to come up with entertaining details for what you're wearing/wielding. This gap-filled superstructure gives you lots and lots of space to create and fill in the blanks. (In our first game the Giant Hawkoid was swinging a concrete-filled Hippity Hop.)

This edition of Gamma World is fantastic fun—it made us literally sick with laughter and resulted in several Mountain Dew-related choking incidents—and will be our go-to game for when we want to goof off. Well, more than usual, anyway.

UPDATE: The session report of the sickening/choking game:

"Show me on the robot where the bad plant touched you."

The setting and rules pull a solid 4.5 stars. This boxed set gets 3.5.

Being a paper-pencils-dice purist everything that comes in the box, save the rule book, is useless to me. Including the box.

I suppose they didn't include dice since anyone who'd pick this up has buckets at home... right? Still, seems weird to me that a boxed set doesn't include everything you need to play.

Discounting out of hand the maps and counters that make it look like a board game, the cards are especially stupid. I'd much rather have a list of powers in the book for players to roll against. And why buy "boosters" at $4 per 8 cards when you can find complete lists of all the mutations and tech online? And, again, I'd really rather they were just lists in the book.

I've always enjoyed Gamma World (at least 1st edition), and this one looks like a fun reboot, nonsensical packaging choices notwithstanding.

UPDATE: The cards end up being very handy, and I like dealing treasure out of the Omega Tech deck. The players like it too—they sit up like bell-rung dogs when they see me reach for it. Just wish those cards weren't "collectible," through. I'd gladly buy full sets.

UP-UPDATE: I wasn't originally sold on the 6x9 trade-paperback format for the rulebook, but after reading, referencing and playing with it I have to say it's quite handy. I like it a lot!
H
HiveGod 1 reviews
Comments (0) | Was this review helpful to you? 1 0
Discuss this article
Log in to comment
Posts in discussion: Gamma World Roleplaying Game