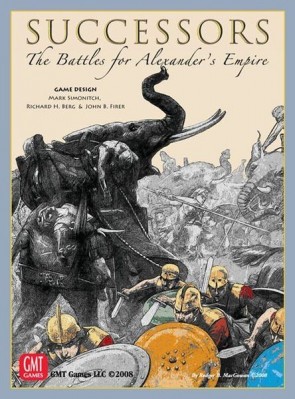 When Alexander the Great died in 323 BC, he left no clear heir to the immense empire he had conquered. It was not long after his death that the Macedonian generals began to war among themselves over who would be the regent or successor to Alexander's empire. By 305 BC they had given up on succession and began to carve out their own kingdoms. Successors III is a four-player game based on those wars.

Successors was first published in 1997 by Avalon Hill. Some years later a second edition rulebook was published that gave more options for the Tyche cards. Successors III builds on the foundation of the Successors II rules set plus expansion cards that appeared in the Boardgamer. Minor refinements have been made to make the game easier to play and increase enjoyment. The map is very similar to the original with some minor changes around Macedonia. Counters have the same excellent artwork for the generals and new GMT artwork for the combat units and control markers. The Tyche cards have received the most changes—nearly every card has had some minor modifications and a few new cards have been added.

In addition to the changes, the rules have been cleaned up and improved. Years of questions and answers on Consimworld have been used to clarify the rules. The rules also include hints on strategy from a number of long-time Successors players, and an extended example of play.

StarCraft: The Board Game
5.0
D doubleozaphod
"...because I think this game could have made a bigger..."