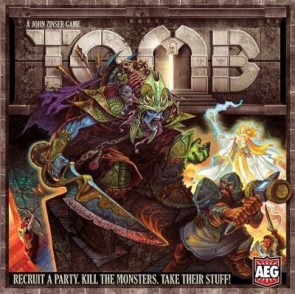 Tomb pits opponents against one another in a fast-paced board game of monsters, traps, and treasures. After assembling your party from a plethora of random characters at the Inn, you set out for the Tomb. The Tomb is created before the game begins, with each player hiding treasure, traps & monsters in each room, unknown to the other players. Know where you left the chest of gold? Better hope your opponent didn't put a Pain Eater in the same room! No rogues at the Inn today? Hope you don't run into a poison dart trap! Tomb captures the fast-paced feel of a dungeon crawl without the hours of set up beforehand. Just grab your party & go! Each character brings unique abilities. And with the map changing every game, as well as the available characters, no two games will ever be the same!