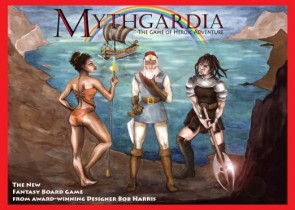 MYTHGARDIA is set in a world made up of five Realms, each with its own distinct mythos. Players take on the roles of specific characters and go in search of fabulous Crystal Treasures, attempting to get them to safety and out of the hands of the game’s villain, the evil J’Cabe, whose minions are always in pursuit.

As they move around the game map, players draw Legend Cards, which can mean an encounter with Frost Giants, or having to tip-toe through a harem. Success in these adventures is achieved by rolling dice and adding points for helpful Companions and useful Items of Equipment. You can also spend some of your precious Luck Points to influence the outcome.

Characters also acquire Event Cards, which allow them to influence the game in various ways, from moving across the board in a sudden burst of speed, to taking Items or Companions from other players.

Many opportunities arise for players to challenge each other for possession of the crystals, and delivering them to one of the three Sanctuaries is never easy.