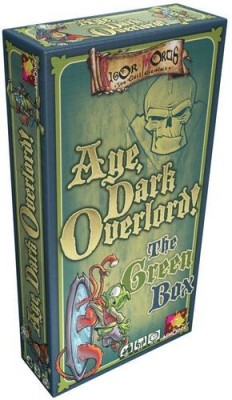 This is a negotiation Party/AT game with an underlying card game.

One player is the Dark Overlord who sent his minions, the other players all resembling goblins, out on a mission which they - of course - botched. Now the goblins are desperately trying to talk their way out. The game ends when a single scapegoat is determined, all other players have to continue their miserable lives as minions (= they win).

The game uses two decks of cards: Characters/items/locations/etc., which the players have to build into their stories, and actions, which are used to move the blame towards other players, interrupt another player's story, etc.

If one player gets stuck in explanations, makes contradictory statements, admits the destruction of one of the Dark Overlord's items, etc. she or he earns an "evil eye". Three "evil eyes" and you're dead, although you may beg for mercy, which the Dark Overlord may grant, thereby removing the third (fatal) "evil eye" if luck allows; the player has to draw a card without a skull on it.

Rating
4.0
Already have an account? Log in now or Create an account
Players make this game shine, when their lives are
October 05, 2008
Rating
4.0
The game neatly encourages story telling. The following may sound strange, but because the game forces you to spin stories about the craziest events, the conversations appear less forced (when compared to serious story telling games for example). The game really relies on its players, so play it with boring/austere people and it will suck. It isn't much of a surprise that this game is loved by Italians or French and is hated by my fellow Germans (fortunately not including my friends).
S
Schweig! Top 50 Reviewer 9 reviews
Comments (0) | Was this review helpful to you? 0 0
Discuss this article
Log in to comment
Posts in discussion: Aye, Dark Overlord!