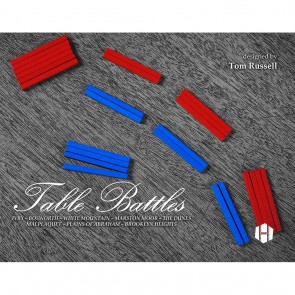 Here is something new and exciting, something completely unlike any other game on your table.

Table Battles is a thinky filler, a light dice game that nevertheless will have you scratching your chin and agonizing over your decisions. It reduces armed conflict to its essentials, to the absolute universal truths behind all battles: the threat of force and its application. It's about leverage, about feints and counterfeints, threats and counterthreats, about creating openings and then going for the jugular, about leaving openings and springing a trap.

Players roll and allocate dice to Formation cards, with each card accepting specific die results or dice combinations. On a later turn, those dice are removed to activate the formation, attacking a specific enemy formation, with hits resolved by removing wooden pieces assigned to each formation. But the enemy may be able to screen the attack (cancelling it), counterattack (inflicting extra losses on the attacker), or absorb the losses via a strategic reserve. In fact, in most cases, if the enemy can react, they must react, preventing them from using those dice to launch an attack of their own, and depriving them of their action on their next turn. The result is a tense cat-and-mouse game in which players maintain a bitter deadlock until it's to their advantage to break it, or until the other guy blinks.

This base set contains eight battles from across four centuries of conflict. The Battle of Bosworth, Richard III's last battle, might be decided by the intervention of the Stanleys. The Battle of Ivry secured Henri IV's power over France thanks in large part to the unreliability of the enemy's mercenaries. The Battle of White Mountain saw a superior defensive position squandered by bad generals squaring off against great ones. In the Battle of Marston Moor, Cromwell's well-disciplined cavalry proved to be the key to victory. The Battle of the Dunes was a brilliant victory by Turenne that saw infantry, cavalry, artillery, and even navy working in concert. The Battle of Malplaquet saw so many losses on the side of the victors that the vanquished French general Villars told his king that another such defeat would win them the war. The Battle of the Plains of Abraham was a minor skirmish with outsized consequences, usually considered "ungameable", but here becomes a tense contest. Finally, the Battle of Brooklyn Heights sees the overwhelmed American rebels outflanked and outnumbered, but desperate to give as good as they got.

Each of these battles is recreated in broad strokes that still allow for the essential situation, and even a little chrome, to come shining through. And each of these battles could go either way in any given play session. Table Battles is an ideal filler game for grognards with fifteen or twenty minutes to spare between games, and also a great way to get your toes wet if you're not sure about this whole "hex-and-counter" thing. Future expansions are already in development, and will give you hours upon hours of enjoyment.

Best in its Weight Class
January 05, 2021
Rating
5.0
Pound for Pound this game packs more punch than anything of its size, and especially price.

This game is $12 Print 'n Play and you can build it with a few printed pages, penny sleeves and a bag of M&Ms.

Excellent dynamic play, the game tells a story with its innovative initiative mechanic, it's even historical if that's your thing. There likely will be a dozen versions of this because the system is so sound. This is Magic The Gathering Lite on the cheap and a bunch of fun for two people that have half an hour to spare.
S
Sagrilarus Top 50 Reviewer 30 reviews
Comments (0) |