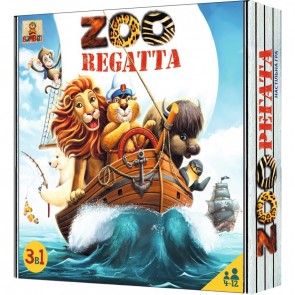 This game is good to start introducing young players to the fascinating world of board games. Through the use of a two-sided playing field, customers are offered three games in one box at once. You can find the rules on the site of producer using this link ZOOregatta

The first game - "Dangerous Race" - is a competition of captains of sailing boats, seeking to be the first to reach the finish line. The distance that the boat travels in one turn is determined by the roll of the cube. Ships in the game are plastic miniatures, the same as real ones, only small ones.

In the second game - “ZOORegatta” - players are expected by a map of the real world and complete freedom of action. Players themselves lay their route on the map, trying to be the first to travel around the world and return to their home port with a full collection of animals.

ZooRegatta is family oriented, and its rules are designed so that no one leaves the game - everyone will have a chance of success

We added a third scenario to the game - “Grab the Pirate”. In it, several players (pirates) abduct animals, and another player (patrol) catches them.

Read FAQ on the web-site of board game producer to find out more about this game.