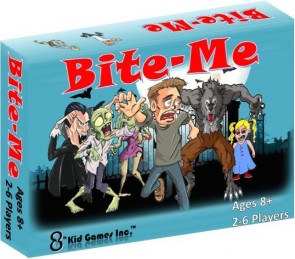 Bite-Me combines an epic battle of survival between Humans, Vampires, Werewolves, and Zombies with hilarious quirky artwork, cheesy puns, and strategy for the ultimate card game.Imagine you are trapped at a table and only one player will survive. Your only hope is to infect and turn the other players into monsters like Vampires, Werewolves, or Zombies, so you can kill them. Kill one of each type of monster and still be human and you win! The problem is all the other players are trying to infect you so they can kill you. Plot your strategy to use magical objects, spells, and weapons to battle Monsters, defend yourself, or become human again.

Many thanks for your consideration! Please let me know if I can supply any other info!