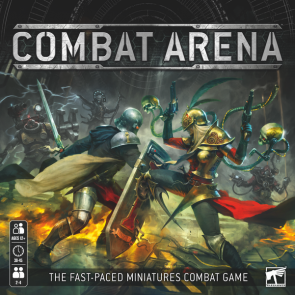 Enter a world of gladiatorial combat in the far future in Combat Arena – a standalone battle game based in the world of Warhammer 40,000!

Combat Arena is a fast-paced miniatures combat game that pits you against your friends in lighting-quick bouts of tactical action. Set aboard an Imperial vessel, the game sees each player pick a hero and battle it out, mastering their distinct fighting styles and abilities to claim victory.

Select your hero and enter lightning-fast skirmishes with 2-4 players. Quick to learn, quick to play: get gaming in minutes with rewarding but simple rules, and complete your bouts in 30-45 minutes. Includes 5 beautiful models: designed to be buildable without glue, just snap them together and you're done! Hours of fun out of the box: with loads of action cards to master and each fighter offering unique challenges, no two games are alike.