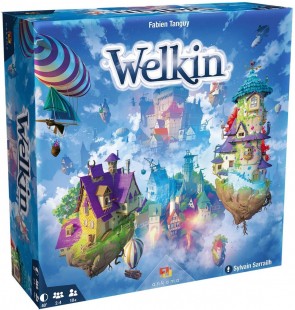 Construct Magical Buildings. You now are a celestial construction manager, architect of the sky!

The aim of the game is to win the most gold by crafting and selling those famous floating islands. Each turn, the players/architects can either select a new island creation contract, produce resources among the 5 existing types, or allocate these resources on their contracts to craft them. Players have limited spaces to store these contracts and resources, so they’ll have to juggle with their production line to complete their objectives in an optimized manner!

As soon as a contract is fulfilled, it is immediately sold and its creator receives gold depending on the resources used for its creation… but their value isn’t fixed and depends on the current market! Is it better to get one’s rewards immediately, or to manipulate the resources’ values for a greater reward later…?

Once there’s no more contracts available, the game ends. The architect who amassed the most gold will get their place among the stars!

Wiz-War
5.0
C Colorcrayons
"This is my absolute favorite game. The rulebook really lays..."