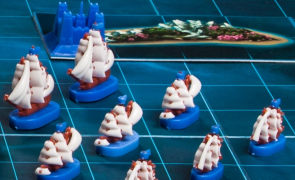 "Admiral" is a real game designer, which allows players to create their own version of the game, based on the developed rules.

"Admiral" is the most detailed game on the theme of naval battles of the Era of Sail in the world!

A huge, almost a 1-meter long, playing mat, 24 ships, 5 islands and many other elements fill a 2 kilogram box. "Admiral" is ready for the game immediately after opening the box - the ships are already assembled, and are waiting for the teams of their admirals.

A set of 24 assembled ships: 6 Battleships, 6 Galleons, 6 Frigates and 6 Brigs is included.

The sizes of the ships taking into account the support are shown in the table:

"Admiral" is a real game constructor that allows players to create their own version of the game, based on the developed rules. And “Admiral” is a great gift, which is not a shame to give to the most demanding recipient. After all, using the components of the game, you can prepare an installation that will decorate any room.
And, in addition, the Admiral has unlimited expansion options - you can purchase additional components, ships, a playing field, and even arrange the Battle of Trafalgar on the table.

Number of Players: 2-6
Age of players: from 10 years
Time for game party: 60+ minutes
Time to learn the rules: 40 minutes