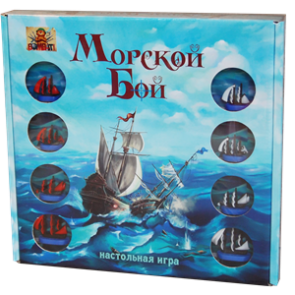 "Naval Battle" is the starting game in the line of fast, tactical board games with a naval theme.

Players are invited to act as commanders of the fleets of sailing ships, and in the battle to defeat the enemy.

The set includes 8 plastic ship miniatures (4 for each player) of 4 different types - a battleship, a galleon, a frigate and a brig, as well as a two-sided playing field, which is a map of the ocean on which the naval battles belong.

Since “Naval Battle” is the initial game of the series, it has the most simplified rules, and a minimum of additional components. However, the main highlight of the entire naval series - the miniatures of sailing ships, is present in it.

Naval Battle is a combination of calculation and excitement — the participants move the boats along the playing field, conduct artillery fire (the results of the shooting are determined by the roll of the cube), trying to drown the enemy fleet or to capture the fortress of the opponent. The rules of the game are short and simple, well illustrated and can be mastered within 10 minutes. Time of the game game will not exceed 25 minutes — even the most restless captains will not have time to get bored.

Axis and Allies
KB Ken B.
"She hasn't aged all that well, she's still too long..."