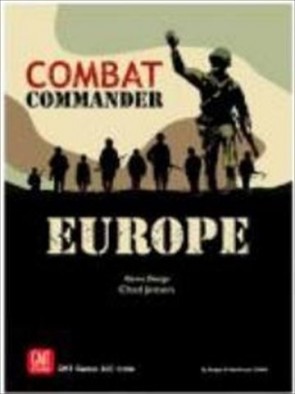 A World War 2 squad level hex and counter wargame. This game is card driven, meaning players have a deck of cards (unique to their nation) which they draw from and play throughout the game in order to issue commands to their squads.

The game comes in two ‘parts’ – The first part “Europe” contains the US, German and Russian forces while the “Mediterranean” expansion comes with French, Italian and British forces.

Other smaller expansions are also available for the game.

Is it the most realistic treatment of WWII. Perhaps not. But I don't care--even if I am a professional historian who has dabbled in military history -- in both publications and as a fellow at West Point. I can play this with my pre-teen son and have a blast---quite a bit of complexity without hurting the brain. The introductory game is a great way to learn the game---it is basically a walk-through of the game with a "stacked" deck. One walkthrough game and we were ready to go.

Rarely do the games last for more than 2 hours but the yelling and screaming that can go on during the game makes it seem like far less. Once you get the hang of it, the game moves quickly.

The lack of vehicles don't bother me in the least...again, perhaps because my primary concern isn't simulation.

That said, some critiques decry the lack of control because of cards...being unable to move, etc. Or the chaos and wild swings of fortune that can occur. All I can say is that having ready accounts of military history from many different eras, the one constant on a battlefield is chaos and irrationality. War is not always logical or clear with perfect information and intelligence....something gamers don't often remember.

Without a doubt, this game has theme and narrative more than any other wargame that I've ever played! I can't recommend it enough.
M
Merkles Top 500 Reviewer 1 reviews
Comments (0) | Was this review helpful to you? 0 0
Not a particularly fun or realistic consim
October 27, 2008
Rating
2.0
Although this game is maybe the most elaborate and innovative war game in recent years, it has issues.

The game is frustrating because sometimes (or when you're unlucky; all the time) your squads can neither shoot nor fire. Some people argue that this is realistic, - I don't have any combat experience to dis-/prove this point, but from my understanding an elite unit accompanied by a competent leader should be able to move when there's no enemy unit in sight. The same goes for a MG in a prepared defensive position which should be able to fire at advancing units when manned by an attentive crew and when the gun is neither jammed, unloaded nor otherwise restricted in its functionality.

Defensive positions are almost impenetrable. As opposed to other games, satchel charges, panzerfaust rockets and even artillery strikes leave houses or pillboxes unscratched. This is obviously taken from CC:E's influence game Up Front, however in Up Front it is possible to flank every position. Furthermore preparing units for close combat against defenders in these fortifications is a pain in the arse, because you need a good set of "Advance", "Fire" and "Movement" cards, which is very hard to build. And don't get me started on melee combat.

Furthermore you only lose units through bad luck. You can have a unit fired at by an enemy flame-thrower and this is no problem when you have a "Recover"-card at hand.

The system is also very gamey. Firing at units without any chance of success, just to use up cards and "advance in time", is a plausible tactic, as is blatantly ignoring one's objective to move units past the enemy.

The many possible random events spice up the game, but some are just illogical in some situations.

The game is a really neat design, but it fails to simulate combat in WWII, when compared to Squad Leader for example. Compared to this old shoe, it's also only slightly more fun. Another war might really fit better, I thought about WWI trench warfare, but this in not relevant to this comment.

This rating is very subjective and displays the disappointment I had missing this game's supposed greatness.

I might want to try Combat Commander: Pacific though, if it contains some rule changes or a different composition of the card decks.
S
Schweig! Top 50 Reviewer 9 reviews
Comments (0) | Was this review helpful to you? 0 0
Not a Tactical Wargame
November 06, 2008
Rating
2.0
Combat Commander is a game with WWII imagery and terminology that uses cards to determine when counters on a hex map can move and fire. Many turns can pass while players draw cards into their hands to try to get something they can use, in the meantime the opposing forces stop dead, nothing happens. Good tactical opportunities can't be exploited unless you have the right cards. Fog of war and battlefield chaos didn't result in every battle of the war being some weird non-reactive situation with entirely random results. There are no tactics involved with this game, just card play that governs the actions of chits. Hand management is not tactical. CC apologists will tell you otherwise but that's not the case.
H
Harkonnen13 Top 50 Reviewer 12 reviews
Comments (0) | Was this review helpful to you? 0 0
Discuss this article
Log in to comment
Posts in discussion: Combat Commander

Cockroach Poker
4.0
N Nodens
"Can be played with anyone."

Lord of the Rings: The Confrontation
5.0
J joseaguerof
"Son, if you're hesitant, don't. Just run and grab..."