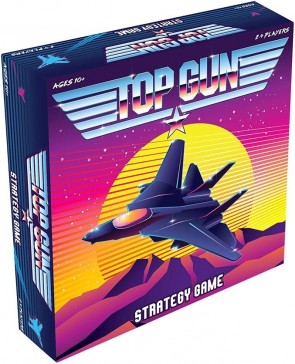 Top Gun: Strategy Game lets puts players in the pilot seats of Team Maverick/Goose and Team Iceman/Slider. Each team takes on the other during a intense air combat training exercise. Pilots must strategically maneuver their planes and coordinate with their Weapons System Operator. Intense gravity-defying aerial maneuvers and securing a valuable target lock on their opponent will secure a swift victory.

Being Top Gun is a mental challenge as well as a physical one. When they aren't in the air, pilots will face off in a volleyball card game, where they strut their stuff to gain rewards or intimidate an opponent. In order to ensure victory, players must succeed at their Ground Game to increase their education and confidence, giving them the tools and the nerve to excel in the Air Game.

When they aren't in the air, pilots will face off in a volleyball card game, where they strut their stuff to gain rewards or intimidate an opponent.

Michael Barnes replied the topic: #305370 20 Dec 2019 14:25
Are you kidding me? That sounds amazing! I think that’s brilliant, it’s a Top Gun game and that is an iconic scene! If it were just the dogfighting, it could be any old fighter plane game.

boothwah replied the topic: #305381 20 Dec 2019 16:19
So this one winter, I think 1992, after college transition, me and my brother (18 at the time) where staying with my mom in this place she was renting out in the rural pucky brush. Nice place, but no cable and no local stations.. We had VCRs back then. One of the only VHS tapes in the house was Top Gun. Not having anything else to run on the tube, I think we watched Top Gun probably 50+ times as background filler.


I don't know if this would traumatic or cathartic.

dysjunct replied the topic: #305391 20 Dec 2019 21:12
I’d be very interested in a game exclusively about the homoerotic tensions between fighter jocks on the volleyball court. Just leave out all the flying plane stuff.

Is this a reskin of that fencing "En Garde" game? That game was actually kinda dope.
Read More...

City of Remnants
2.0
L Legomancer
"I read a review of this that sounded good and..."