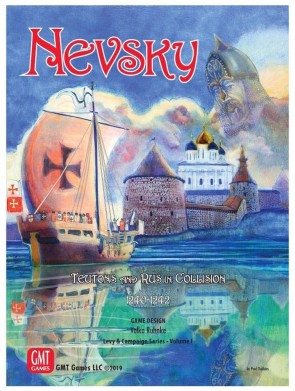 Nevsky: Teutons and Rus in Collision, 1240-1242 is a board wargame about the storied clash between Latin Teutonic and Orthodox Russian powers along the Baltic frontier of the mid-13th-Century. It is the first volume in GMT Games’ Levy & Campaign Series portraying military operations in a variety of pre-industrial conflicts. In Nevsky, players raise and equip their armies, then provision and maneuver them to ravage or conquer enemy territory or defeat enemy forces in battle. Feudal politics obligate an array of lords and vassals to serve on campaign—but only for limited periods. Players must keep an eye on the calendar and reward lords to keep their armies in the field.