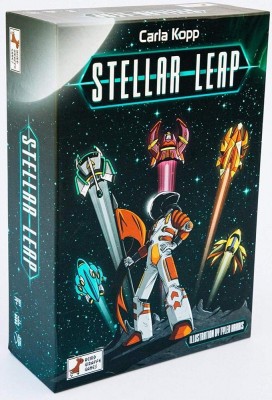 Explore the galaxy in Stellar Leap!

Take on the role of an alien species as you discover new planets and complete missions in this family-friendly space exploration game. Become the most prestigious alien species in the galaxy by completing missions, discovering new planets, increasing population, and fulfilling your hidden trait’s objective.

Variable Player Powers mean that you can manipulate the planets that generate resources each turn in different ways than your opponent can, which leads to different strategies for each power. Are you going to team up with your opponents so that everyone gets resources on your turn or will you attack them and cause them to scatter to other parts of the galaxy? Game altering events are triggered by player actions and can have minor or lasting effects, usually being better for the player that triggered the event.The game ends after the sixth event and the round is completed. The player with the most total prestige is declared the winner!

Stellar leap is a space exploration game for 1-5 players with worker placement, variable player powers, & a strategic twist on dice rolling in about an hour.

Earn prestige by completing missions, discovering new planets, increasing population, and fulfilling your hidden objective. Variable player powers and game-changing events mean that every game is as different as the planets in our galaxy!

Supports multiple play styles: based on who is playing, stellar leap can be semi-cooperative, really aggressive, or somewhere in between and you can win by playing in any of those ways.

Custom Game Length: change the play time easily by increasing or decreasing the number of events to complete the game.

Player choice matters: choose your player power and hidden trait to help support your specific strategy, designate which planets and asteroids to place where they'll benefit you the most, and choose when the game ends by either causing events to trigger or avoiding them.

AI variants: experience the galaxy of stellar leap against a variety of opponents on your own or add an AI to your two player games to simulate the three or four player Game.

Cleopatra and the Society of Architects
3.0
S Sagrilarus
"It's a good game for a few plays. Enjoy..."