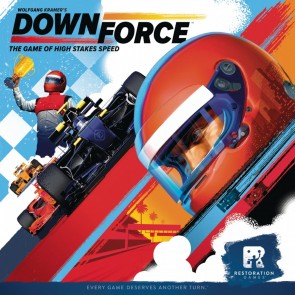 Tires screech. Gears shift. Drivers push their million-dollar cars to the limit. The difference between victory and defeat could be a single card.

Downforce is a card game for 2-6 players based on Top Race, the award-winning design by the legendary Wolfgang Kramer. Players first bid to own the six cars in the race. Then, they play cards from their hand to speed them around the track. However, most cards will also move their opponents’ cars. So figuring out just the right time to play a card is the key to victory. Along the way, players will make secret bets on who they think will win the race. Whoever has the most money from their prize money, winning bets, and remaining bank wins the game.