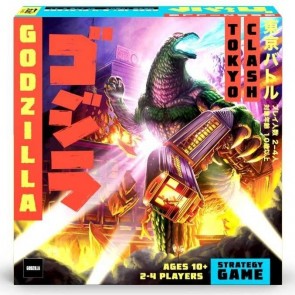 Battle for dominance as the most terrifying monster in Japan.

As Godzilla, Mothra, King Ghidorah, and Megalon, players will stomp. smash and destroy Tokyo and each other in this epic battle game.

Each Kaiju is represented by a large figure and it's own deck of cards with special abilities and powers.  As they rampage through themodular cityscape of 3D buildings, they earn energy, allowing them to enhance their abilities. Attacking opponents can cause damage which removes cards from their deck.

Jackwraith replied the topic: #308020 13 Mar 2020 15:02
So card-driven King of Tokyo but with the actual IP? I'll admit to being tempted by anything with King Ghidorah (I was such a fan that I realized his roar was the same sound as the phone at Ultra Man's Science Patrol HQ when I was all of 6 years old.)