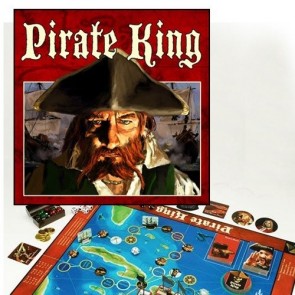 Pirate King is a new twist on classic game play. Seamlessly blending classic board game genres into one exciting adventure, players, or in this case Captains, sail around the Caribbean capturing territories and building fortifications while picking up crewmen and cannons for their ships as well as great mysterious treasures that aid in combat, movement, economics and even curses!

This is a game of economic management, property building, and naval combat. Victory can be achieved through force of arms, economics or a combination of the two. Why pay when you can fight? That’s the pirate way. But only the wise captain knows when the price of fighting is too high. It all depends on what kind of Captain you want to be on your way in becoming the Pirate King."

Rating
4.0
Already have an account? Log in now or Create an account
The Best of a Scurvy Lot
November 12, 2008
Rating
4.0
Pirate King is an AmeriTrash triumph of theme and toys over mediocre mechanics. The basic concept of the game is uninspired: Pirate-themed Monopoly, except that you can avoid paying by attacking instead. Probably a closer analogy would be High Stakes, which was Vegas-themed Monopoly, where you can pay or play (gamble) at the hotels. It's a decent game, and far better than most pirate games.

Pirate King is just so loaded with theme, conveyed by the excellent components, that it elevates the game to actual fun. The toy factor is huge in this game. Instead of paper money, there are jewels (pretty glass beads) and dubloons (plastic coins), and you store them in plastic treasure chests. All of the artwork is great, especially the crew member markers, which actually look like dirty, dangerous pirates and not silly transvestites. Players mark their ports with little plastic flags, and the board is an attractive and fairly accurate depiction of the Spanish Main.

Movement is kind of fun, because you place a sailing chit some spaces ahead of your ship and then roll to see if the winds allowed you to move there, or possibly held you back or carried you past. This isn't as frustrating as it sounds, because if you overshoot your destination, you still deliver your cargo. That sailing chit is just about the only innovative idea in the whole game... nearly everything else is clearly derivative of family boardgame classics like Monopoly and Risk.

But it works together so well. Cannon battles, at sea and in port. Magical artifacts to be found. Mutiny, parlay, a Commodore who intermittently deals out harsh justice, it's all here. And even thought the main victory condition comes from VP for developed ports, you can attack ports controlled by other players to reduce their VP. And there is always the chance to abruptly win the game by beating the toughest ship in the Caribbean, the Commodore's ship.

I give Pirate King a solid 4. The game is fun, but runs a little long, and only allows 2-4 players, so it doesn't hit the table often. But when we do play, it's always a fun time.

S
Shellhead Top 50 Reviewer 24 reviews
Comments (0) | Was this review helpful to you? 0 0
Discuss this article
Log in to comment
Posts in discussion: Pirate King