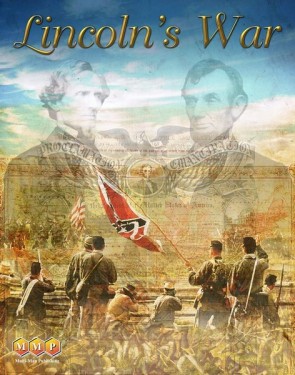 Lincoln’s War reflects the fickle nature of politics and its influence on military policy-making during the American Civil War. Here, the battlefield is an extension of the political arena. Many historical movers and shakers support or oppose their presidents’ war plans. Will Mr. Lincoln save the Union? Will Mr. Davis succeed in sundering one nation and creating another? How will you direct their political support?

Lincoln’s War is a card-driven game using cards to activate generals, but in Lincoln’s War, activation numbers are also political currency or PC. PC not only activates generals but promotes worthy commanders, purchases war material, forces indecisive commanders to act, and represents support for the war. A decisive PC point spread is an advantage in winning the game but driving an opponent to 0 PC (and 0 Congressional support) at the end of a turn will ensure victory, even in the face of defeat.

Unique features include a diceless combat system, seditious characters, and immobilization tokens. The combat system requires players to husband resources and congressional political support to ensure victory. Seditious characters oppose their respective Presidents’ handling of the war and sooner or later will erode a resident’s vital political support. Immobilization tokens reflect damage in the form of casualties, as well as hesitation, confusion and even insubordination.

Lincoln’s War was designed by John Poniske with the assistance of Mike Joslyn, and features the artwork of Niko Eskubi and map artwork by Mark Mahaffey.