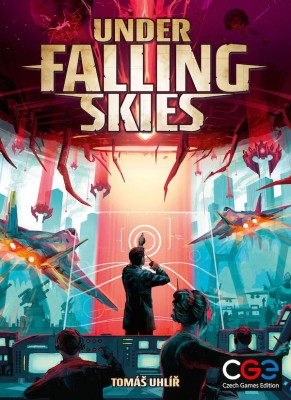 Aliens have arrived to conquer Earth. Enemy ships fill the skies. Humanity retreats to underground bunkers located below cities across the globe. Stand against the common threat! Fight the invaders city by city. Build a team from around the globe to save your planet and defeat the aliens!

Under Falling Skies is a solo game with a multi-mission campaign. In each mission, you take charge of defending a besieged city.

Your actions are powered by an innovative dice placement mechanic. When you choose an action, you are also choosing which enemy ships will descend. Bigger numbers give better effects, but they also cause ships to descend faster. Expand your underground base to gain access to more powerful actions, allowing you to shoot down enemy ships or deploy robots to increase your workforce, but don't forget to work on your research and watch your energy supply.

The mothership draws closer every round, ratcheting up the tension. Can you complete your mission before your base is destroyed?

Under Falling Skies is based on the print & play game that won the 2019 9-card Nanogame P&P Design Contest. Built on the same intriguing mechanics, it now comes with a full-scale campaign providing even more content for hours of intense fun.

Gary Sax replied the topic: #318930 06 Feb 2021 11:57
So what is the product model for this game? Now that it's the Czech Games Edition, does that mean everything you want is wrapped up nicely in one package?

Is this like a Legacy game with unlocks and stuff or are there no major connections between campaigns/storyline to open up? Sounds like you acquire more capabilties as you go along. And dammit he already took the Space Invaders line I was gonna use

A solo legacy game.....that's a thought.

Each chapter introduces new concepts that make the game slightly more complex, so there is a tiny bit of sequential order in that way. You'll get randomized cities, characters, and missions that can be shuffled to create new combos. Each city has a special quirk, and if you lose a game with it you can flip it over to improve the quirk. Similarly, each character has a regular and an enhanced side. If you bring them back for a later mission, you get to use the enhanced ability.

I really like the game. I think it has a very engaging puzzle quality. Oliver's reference to the old Atari Space Invaders is especially apt-- the variable pieces of the scenarios are just like the many different settings on the old video game. Sometimes you had skinny bases, sometimes they were fat; sometimes you had stationary blockers, sometimes they moved; sometimes the aliens were invisible! I must have played with every combination there was on that old console.
Read More...