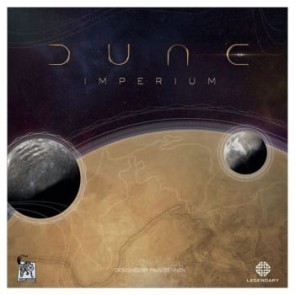 Deck-building meets worker placement in a new board game of galactic struggle.

The iconic universe of Frank Herbert`s Dune inspires a new generation of fans in the upcoming film from Legendary Entertainment, setting the stage for the first new Dune board game in over 40 years. Dune - Imperium breaks new board game ground with an innovative design from Paul Dennen and the team at Dire Wolf behind the award-winning Clank! game series.

Lead a Great House to glory on the hostile planet Dune, where subtlety can be more important than strength. Purchase cards to increase your options, then strategically commit your resources for maximum gain. Military conflict and political intrigue provide many paths to victory. Harvest spice from the deep desert, and leverage your spoils into economic might. Gain influence with powerful factions who can aid your victory - or guarantee your doom. The choices are yours: the cards are dealth, and the Imperium awaits. Control the Spice. Control the Universe.

The power of the entire universe can be yours, and war is but one way to claim it. Your agents are ready. The cards have been dealt. The choice is yours. Whom will you influence? Whom will you betray? How far will you go to seize it all?

Support for all player counts is included in the box. Two-player and single-player modes also supported by an optional companion app which adds automated opponents. 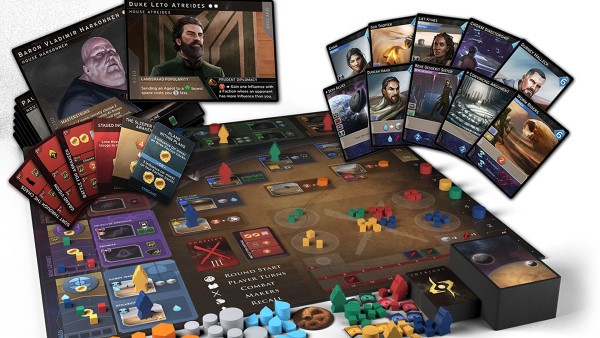 Whom will they sell to with that torturous tag line?

Shellhead replied the topic: #312910 08 Aug 2020 21:43
"The poser of the entire universe" is about right. Deckbuilder and worker placement is like three strikes right away. Let's just reduce the setting and theme to a thin, peeling label that we can easily apply to a couple of massively overused and overrated mechanics. Hard pass.

OhBollox replied the topic: #312911 08 Aug 2020 22:32
Cautiously optimistic. Would love to see a Dune deckbuilder (I still play Imperius, which is the best non-Dune Dune game, and dream of it incorporating deckbuilding), but I'm not convinced they can, or would, incorporate the kind of competitiveness I feel is essential to the setting. The only deckbuilder I can think of that has the required level of savagery is Arctic Scavengers.

I later discovered that I was wrong.

Shellhead replied the topic: #312927 09 Aug 2020 16:31
When you read the Dune books, or watched the movie or the tv show, did you feel that Dune was primarily about spice farming? Because worker placement deckbuilder Dune is almost certainly going to be a spice farming game. We can thank BGG for brainwashing a large segment of our hobby into thinking that eurogamers are the best games, so much so that all standard euro mechanics should be applied to every setting and theme and license.

Msample replied the topic: #312928 09 Aug 2020 16:33
Worker placement/IP license combo- just reminded me of the Nazgul/Quarriors mashup. Never played it, but heard nothing good about it.

Jackwraith replied the topic: #312931 09 Aug 2020 18:14
Personally, I'm finding it difficult to understand how anyone can take anything either positive or negative from this. The preview actually previewed precisely nothing except a couple vague mechanics with Dune attached. How is that either bad or good?

'Worker placement' can mean guys holding different sietches on Arrakis to this or that benefit. 'Deckbuilding' can be a matter of accumulating armies to hold said sietches. Nothing they said means basically anything. I'd wait before casting any kind of opinion.

ubarose replied the topic: #312933 09 Aug 2020 18:35
We have very little information on this game. Their marketing strategy is to dribble it out in tiny bits. This is all we have right now. Not even a designer’s name, release date or price.

This is what I got:


Looks pretty fun I think. Not sure I need to buy it (especially because it uses a weird dummy player 2p and seems like it wouldn't be great that way), but I'd certainly be interested in trying it out.

thegiantbrain replied the topic: #315587 26 Oct 2020 18:13
The only thing I've seen of this is the promotional image that makes it look very dull. The whole aesthetic is unappealing. Game might be great.

Ah_Pook replied the topic: #315588 26 Oct 2020 18:36
Yea the board is ugly, but the combination of deckbuilding and worker placement looks fun. The cards you buy have effects, but also determine where your can place workers each round, and also the cards left in your hand when you pass determine how much money you get to buy new cards. Plus there's a fight at the end of each round and whoever sends the most troops gets points or resources or whatever (with hidden cards you can get to boost your combat power after troops have been sent, etc). Lots of fun looking decisions going on.

Edit: looks like $50 for the game, and there's a $55 upgrade pack to replace all the wooden player pieces with minis for some reason.

ubarose replied the topic: #315633 28 Oct 2020 09:43
Correction. Direwolf has informed us that support for all player counts is in the box. The app that adds additional automated players is optional for solo and two-players.

Jackwraith replied the topic: #315634 28 Oct 2020 10:15
When I first saw it, I was totally underwhelmed by the visual design: a bunch of boxes with tiny images of desertscapes and symbology. I'm still kind of underwhelmed but understanding the game makes it a bit more intriguing. Rodney Smith put up a great video that's much shorter than the Dice Tower playthrough:

A deckbuilder with only 10 rounds is a bit of a concern, in that you'll only see those really cool cards that you purchased a couple times/game, unless you're able to set up an engine that lets you draw more on a regular basis. The flip side of that complaint is that 10 rounds means a game that moves swiftly and doesn't drag on too long. The counter-counterpoint is that my favorite game of this style, Tyrants of the Underdark, has never had that problem and I'm not one that's usually concerned about long games, either.

I'm not in a position to be spending more on games and I've never been as much of a Dune fan as most gamer-types (although I do own two copies of the original game for some reason), so I'm not necessarily the target audience for this. And, again, coming back to the visual design... ugh. Everything is just a bit too plain, I think.

I guess BGGers are easily impressed when a game recycles the old worker placement and deckbuilder mechanics.

1. It's a great game.
2. The board is somewhere between pedestrian and awful.

Point #2 was my reaction, as well. I can't say that I've been totally sold by reviews and gameplay I've seen, but I have similar games (Tyrants of the Underdark, etc.), no money, and am not a Dune fanatic. I've also never played Clank!, so I don't have any attachment to Dire Wolf's output, to date. But it certainly seems like a well-designed package.
Read More...