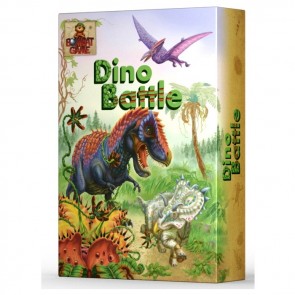 Dino Battle invites you to make an exciting journey into the era of dinosaurs and by choosing your kind - lead it to dominance on the planet!

Long ago, in the Mesozoic era, dinosaurs dominated Earth for over 160 million years. They fought for survival in the thriving prehistoric jungle and evolved in constant battle with their own kind. The jungle grew and conquered the planet and in the huge crowns of trees the largest animals in the history of our planet - herbivorous lizards - found food and refuge. Only true predators were able to hunt these giants and resist them with ferocity, strength and agility. And in the sky, winged pterodactyls reigned, which contributed to this battle for survival.

Dino Battle is avalible direct from the publisher here.

Acquire
5.0
L Legomancer
"This should be right up there with Monopoly, Scrabble, Risk,..."