Tower of Silence: The End of Prophecy 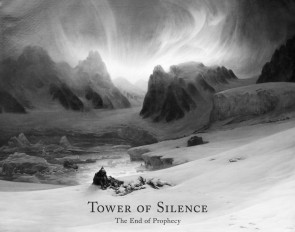 Shipwrecked souls abandoning hope in the fires of prophecy.

Beneath the waves the bodies float. Silently drifting towards the shore. Drawn by a prophecy that soon they shall become. A crumbling tower rises before them. Strange lights burning within. One final effort and then no more. One final no more.

Tower of Silence is a dark and brutal game of abandoned hope and apocalyptic prophecy. Players take on the roles of shipwrecked souls washing ashore at the base of a mountainous tower slowly crumbling away into the icy seas. Drawn like moths to the flame that burns high above, they begin a long and harrowing climb which will either see them lost in the shadows of death or transformed in the fires of prophecy.

Each turn players take control of a new soul (up to a maximum of three souls per player) and roll their starting hope and location. As souls crawl about and make various efforts, their hope dwindles, and once it is all gone, they become shadows of death further draining the hope of those who follow after them. If a soul manages to reach the top of the tower, the player controlling it burns the corresponding standee in a black candle and draws a prophetic uttering. Once all souls have either abandoned hope or been consigned to the flames, the utterings are lined up to produce a unique prophecy for that game only.

The game comes with a dedicated soundtrack (Stilhedens Tårn) recorded and released by dungeon synth artist Offermose. Players are encouraged to listen to the album as they play. A streaming link is provided in the rulebook.

Tower of Silence is the first installment in the Trilogy of Lost Hope which continues with Iron Mountain and Pesta. Visit Hopeless Games for more information.