Alien: Fate of the Nostromo 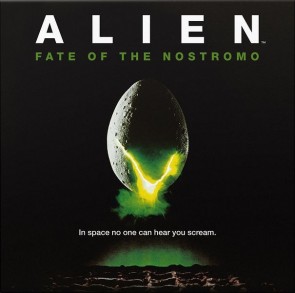 Work together, fullfill your mission and escape the Alien.

In ALIEN: Fate of the Nostromo, players take the role of Nostromo crew members Ripley, Lambert, Parker, Brett, or Dallas. Over the course of the game, they collect scrap, craft items, and fulfill different objectives. The crew will lose and gain morale as they encounter the Alien and other situations. If crew morale reaches zero, players lose the game.

Each turn has two phases. In the Crew Action phase, players creep through the Nostromo's halls, gathering scrap, crafting items, trading scrap and items with other players, and using items and their special abilities. Brett, for example, can craft items with one fewer scrap than other players. If the Alien is within three spaces of the player with the incinerator, that player can use the incinerator to send the Alien back to its nest.

In the Encounter phase, players draw and resolve an Encounter card. The Alien could be lurking behind any corner...

Once the players fulfill their initial objectives, they face one of five final missions, each with a unique set of requirements. Players must fulfill the final mission's requirements simultaneously to win the game. Players can also introduce Science Officer Ash for a more challenging game. Ash moves through the ship, removing scrap and forcing the crew to lose morale. 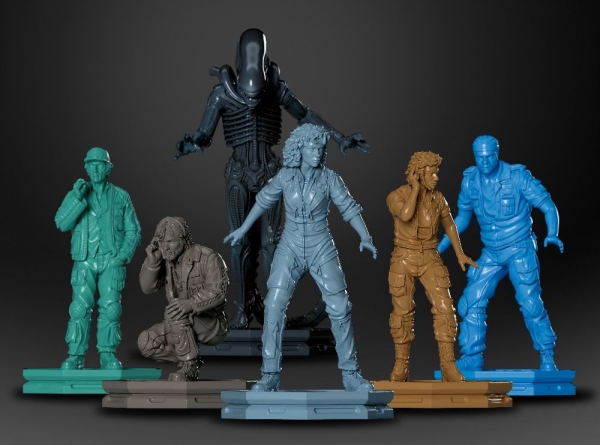 September 27, 2021
Rating
5.0
A brilliant, thoughtful mass-market design that shows how much you can do with relatively little- and it’s also an amazing Alien experience.
MB
Michael Barnes Top 10 Reviewer 137 reviews
Comments (0) |

charlest replied the topic: #319711 25 Feb 2021 15:14
After someone at BGG pointed it out, one thing that really worries me about this game is that there is no character elimination.

charlest wrote: After someone at BGG pointed it out, one thing that really worries me about this game is that there is no character elimination.

What worried me was the guy who said he didn't want player elimination in an Alien game.

Shellhead replied the topic: #319713 25 Feb 2021 15:43
A board game with a horror theme should almost always have player elimination. Or at least character elimination.

Shellhead replied the topic: #319714 25 Feb 2021 15:45
The part that jumped out at me in the description was the emphasis on gathering scrap. It sounds like a crucial mechanic to the game, but is definitely not an element from the movies. This makes me suspect that this game was designed euro-style, mechanics first with theme applied as somewhat of an afterthought.

Jackwraith replied the topic: #319716 25 Feb 2021 15:54
I can see the thematic element to it. Parker had to jerry-rig the "flame units" together so they could hunt the creature, so presumably they're approaching it from that angle, as the players cobble together whatever they can to fight this thing in their midst. But, yeah, I'm not really feeling the "live as a team, die as a team" thing... which is part of my normal aversion to co-ops in the first place.

Shellhead wrote: The part that jumped out at me in the description was the emphasis on gathering scrap. It sounds like a crucial mechanic to the game, but is definitely not an element from the movies. This makes me suspect that this game was designed euro-style, mechanics first with theme applied as somewhat of an afterthought.

It's a major part of Isolation.

n815e replied the topic: #319737 25 Feb 2021 17:46
The scrap thing makes sense. They were jury-rigging equipment, they were scrambling for stuff to outfit the escape pod, they were chasing after Jones.

A lot of the movie was separating them and putting them in places they could be stalked and eliminated.

The player elimination is disappointing, there is real tension in getting killed and losing people. I guess morale isn’t the worst thing, but it isn’t great either.

Josh Look replied the topic: #319738 25 Feb 2021 17:49
As I said in the Gargoyles thread, there are plenty of games that riff on ALIENS. Ones that go for ALIEN are pretty rare. That difference matters to me, as does the license. I hope this is good.

Nemesis is great, but it's still ALIENS. Lifeform is my ALIEN game. Both have more rulebook checking than what I want to deal with.

dysjunct replied the topic: #319764 25 Feb 2021 22:50
My ideal scenario is that the license is given to the CAMP GRIZZLY folks and ALIEN is basically that game but rethemed. Vastly powerful foe, PCs are isolated and can die, culminates in a powerful showdown. ALIEN is a slasher movie in space, go with the best slasher game.

charlest replied the topic: #319765 25 Feb 2021 22:59
I mentioned in the other thread, this design does sound roughly like Camp Grizzly - move about the board gathering supplies while the Alien pursues. It sounds like the Alien is on the board and moved towards the nearest crew member, but can kind of teleport and immediately appear under certain circumstances.

Of course, Camp Grizzly is elevated quite a bit by the deck and all of the compelling events, counselors, and equipment. As well as those excellent finale cards. I'm not seeing anything which may similarly boost this design but the details are not all present.

And for the record, Sucking Vacuum is my space-panic game of choice. My will specifies that it goes to the child that cries the most at my funeral.

Shellhead replied the topic: #319781 26 Feb 2021 09:58
One of the older games in my collection is Intruder, a cheap pocket game that was published in 1980. Aside from a few typos in the rules and even on the CRT, Intruder is an excellent unlicensed simulation of Alien. The default scenario is co-op, but there are also rules for a player-controlled xenomorph. There is also a scenario that replaces the regular crew with space marines, which is amazing because the movie Aliens is based on the same idea but came out six years later.