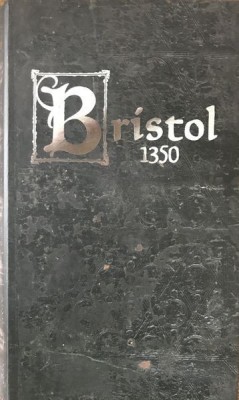 A game of strategy, decit, and luck for 1-9 players

The dreaded Black Death has descended upon the town of Bristol. You are racing down the streets in one of the three available apple carts, desperate to escape into the safety of the countryside. If your cart is the first to leave the town and it is full of only healthy villagers when you leave, you and your fellow cart-mates successfully escape and win the game!

However, some villagers on your cart may already have the plague! They are hiding their early symptoms from you so that they can enjoy their last few days in peace. If you leave town with a plagued villager on your cart, you will catch the plague. You must do whatever is necessary to make sure that doesn’t happen!

On the surface Bristol 1350 is part cooperative teamwork, part racing strategy, and part social deduction. In reality, it’s a selfish scramble to get yourself out of town as fast as possible without the plague, by any means necessary.

This is a standalone game. It is Volume 4 in the Dark Cities Series by Facade Games (previous Volumes include Salem 1692, Tortuga 1667, Deadwood 1876).

Betrayal at House on the Hill
1.0
V Vysetron
"There's maybe a handful of good haunts. If your randomized..."