Athens: The Birth of Politics 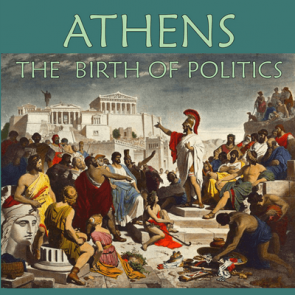 Politicians compete and work together for the glory of Ancient Athens.

Athens: The Birth of Politics reflects the political life of ancient Athens, from the birth of Democracy to the titanic struggle with Sparta. Players cooperate and compete to manage its fortunes, especially its politics, wars and government.
Players must constantly balance personal advancement against the security of the state. They trade and fight to build up the empire, vie for power in the Assembly and on the battlefield.

Each player represents a specific class – Aristocrats, Merchants or Farmers – with its own Statesmen, (dis)advantages and goals. In a unique feature the game reflects the ancient Greek theory of Anacyclosis – the cycles of government – and includes Democracy, Oligarchy and Tyranny. Players can strive to change these forms, for their own advantage, and thereby alter the very rules of the game.

RoboRally
4.0
M metalface13
"Roborally is a great Ameritrash intro game. A lot of..."

Byzantium
0.5
N Nodens
"The setting could make for a terrific narrative. Sadly I..."