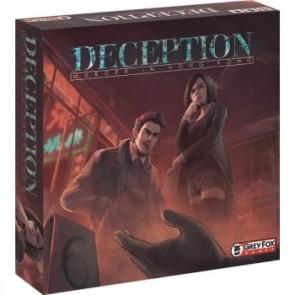 Deception: Murder in Hong Kong is a game of deduction and deception for 4-12 players which plays in about 20 minutes.

In the game, players take on the roles of investigators attempting to solve a murder case, but there's a twist. The killer is one of the investigators! While the Investigators attempt to deduce the truth, the murderer's team must deceive and mislead. This is a battle of wits! Find out who among you can cut through deception to find the truth and who is capable of getting away with murder!

September 27, 2021
Rating
4.5
A hit every time it gets on the table. Allows for creativity and for logical deductions, with very little rules overhead and setup. It's easy to bring out over and over again.
D
DavidNorris Top 50 Reviewer 10 reviews
Comments (0) |

Puerto Rico
5.0
BB Black Barney
"This has been my favourite board game for years (only..."