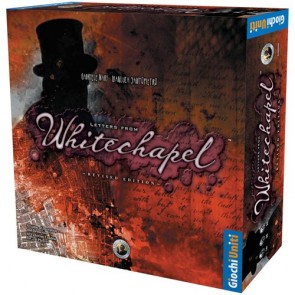 Whitechapel District, London, 1888. The streets of this overcrowded, fetid slum are home to the most impoverished and unfortunate souls in London. Prostitutes ply their trade on almost every street corner. These women are called the wretched, and a more fitting name cannot be found. In a place where nothing could get worse, it has. A killer walks these streets, bringing the lives of the wretched to a terrible end. Jack the Ripper has arrived.y?

In Letters to Whitechapel, one player assumes the role of Jack the Ripper while the other players assume the roles of detectives pursuing him in Victorian London. Jack the Ripper must outmaneuver the detectives in the tangled streets of the Whitechapel District to escape after committing his horrible murders. Meanwhile, the detectives must use clever deduction and their superior numbers to hunt Jack the Ripper down before he can kill again or elude them forever. Will history's most notorious serial killer get away again? Or, this time, will he be brought to justice?

Betrayal at House on the Hill
4.0
H HiveGod
"A very cool "atmospheric" game, best played at night by..."