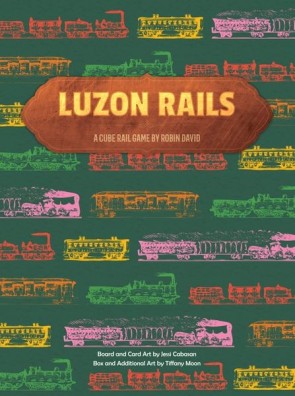 The island of Luzon — the largest and most populous in the Philippines — poses a series of challenges to those seeking to build a railroad network and profit from it. The island's topography is difficult to work with as large mountain ranges collide with wetlands, and an already established shipping industry means that coastal cities will be profitable only to rail networks that have already established effective routes.

In Luzon Rails, players are rail investors. They buy stock in companies, seek to improve those companies, and amass wealth when company dividends pay out.

This game differs from cube rail games you may have played before. Variable company start locations mean that companies can feel quite different from game to game. Actions are selected by playing action cards either from hand or from a central pool, which leads players to make tough decisions and risky moves. How would you proceed in a round where it looks like there will be few auctions? How would that affect your own bids?

Some features on the board try to encourage varied rail types. Landlocked cities grant a long term bonus to companies that then connect to coastal cities. Manila provides a one-off dividend payment for investors who can make a company rail reach that far. And the Southern peninsula creates tight conditions if more than one company has ambitions on the cities down there.

The Kickstarter edition comes with an official solo-mode and the Private Companies expansion.