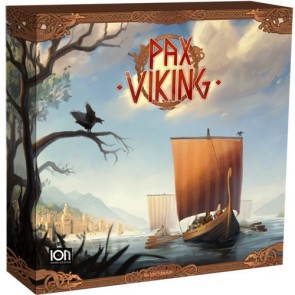 In Pax Viking each player represents a Jarl, a powerful leader in Norse culture. Your family has grown strong over the centuries, and it is now at a pivotal point in history where it has the opportunity to unite many of the Jarldoms into one state.

Settle and seize territories. Recruit powerful allies and advocate to your cause. Establish lucrative new trading posts. Seek the power of the gods and generate followers. Through military, religious, or trade dominance, you may become the first Swedish monarch!

Pax Viking is a historical strategy game for 1-6 player ages 14 and up, the next chapter in the renowned Pax series.

The game highlights Vikings in the 10th century that traveled eastwards towards the rich trade routes of Persia and around the Black Sea. These Vikings were skillful opportunists in matters of silver and axe, ready to yield whichever worked best in any give situation. They shared the same adventurous spirit as their westward traveling brethren, forming strong alliances, influencing societies and founding future empires along the way.