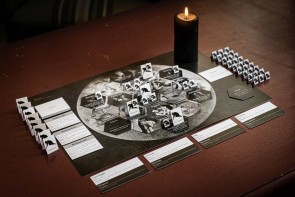 Villagers fighting in vain against the onslaught of a terrible disease.

No one knows when or whence it came. Or what the first symptoms were. Some say that it is an ancient curse laid upon the land. That it goes back to the earliest settlements. That you can still hear it in the screams of every newborn babe.

In Pesta players take on the roles of the last remaining residents in a village plagued by evil omens portending a terrible disease. They must dispel the omens to prevent the disease from reaching the well that sustains the village. Each turn the disease infects a new space, and if players are not careful to keep down the mounting piles of corpses, it spreads even faster. To make matters worse, villagers quickly lose hope against the impossible odds, turning once capable hands into little more than shivering appendages.

Players take turns inflicting random doom upon the village and trying to counter it by claiming and activating villagers. Activated villagers can move a variable number of spaces and perform any number of tasks in them as long as they can pay the cost. If a villager ever finds themselves on an infected space, they immediately become hopeless and lose access to their special ability. They also become susceptible to succumbing to their inevitable fate, ending up as just another corpse on the street.

The only source of light in this very long and narrow tunnel is the omen cards that players can claim as prizes after dispelling them. The cards can be used to take additional actions or decide the fate of the hopeless. Will they return hopeful from the abyss, sacrifice themselves on the pyre, or venture into the wilderness and leave the damned village behind?

Pesta is the third and final installment in the Trilogy of Lost Hope. The two previous installments are Tower of Silence and Iron Mountain.