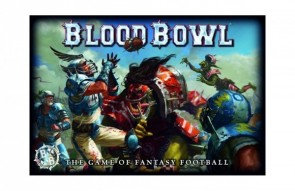 Blood Bowl is the game of fantasy football. No, not the geeky game of picking real NFL players and using their stats to determine games between fantasy team. FANTASY football. Dwarves, orces, elves, undead, trolls, choas mutants, the works.

The game is a hybrid board game/miniatures game as in it uses miniatures on a board. Game play is kind of a mix of American football and rugby. You try to score touchdowns, kills opposing players, foul, bribe the ref and so forth. It's general mayhem.

There have been 3 editions of Blood Bowl so far, plus the Living Rulebook, wich is currently on 5.0.

Blood Bowl can be played in one off games or in league mode in which teams can can permanent injuries, new skills, stat modifiers, new players bought, money earned and so forth.

Rating
5.0
Already have an account? Log in now or Create an account
All-Star Game
March 16, 2009
Rating
5.0
I'm not sure even a 6 does Blood Bowl justice on 1-5 scale. It's a classic and probably my all-time fav. It's got everything: Orcs vs. Undead vs. Elves vs. Dark Elves vs Halflings vs. Chaos in a fantasy rugby/football bash. It's brutal, visceral and fast. It's got RPG elements so you can create your own star player only to have your heart broken when he's pushed into the crowd and ripped to shreds by rapid fans.

It's alright though because you can always buy a replacement.
M
metalface13 Top 50 Reviewer 16 reviews
Comments (0) | Was this review helpful to you? 0 0
Discuss this article
Log in to comment
Posts in discussion: Blood Bowl

Citadels
4.0
S Ska_baron
"Had great times with this one in high school/college and..."

Dungeons & Dragons: Waterdeep – Dungeon of the Mad Mage
3.0
F Frohike
"Not a dungeon crawl but a decent & simple melding..."