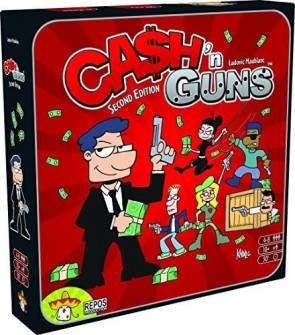 Cash’n Guns. If you like Reservoir Dogs, Pulp Fiction and those Britt gangster movies the director formerly known as Mr Madonna makes, this is your thing. If you enjoy ramming big guns in other people’s faces, this is your thing. If you like violence, well you get it. This is great, no-brainer, stuff. A game takes half an hour or so. Everybody gets to yell and point guns at each other. Junior can blow daddy’s brains out.

The game takes three minutes to explain. You play gangsters. The bank has been robbed. Time for a shoot-out over the loot. Each player gets a gun and the discussion can begin. Two turns and you get the idea. It is bluff and double bluff and guess who’s brains I’ll blow out this time.

After the first game you will be yelling for beer and more bullets. After the second you all start swapping Eastwood and Schwartzennegger quotes. “A man has to know his limitations.” “I’ll be back.” Screaming “mawafakka” in your best Samuel L. Jackson-voice is also fun.

The only thing that feels a bit silly about Cash’n Guns are the ORANGE guns. Suppose they are made in that color to keep you from using them in your next robbery. Still orange sucks.

Do I have to say more?

Critical Hits: Light, Fast, A party game that is actually a GAME and not mad libs for adults, allows for pop culture references to annoy your friends and family.

Critical Misses: Player elimination (but, come on, you probably deserved it), It is no good insisting that “Han shot first.” Some treasure cards (Clips, Bandages) show up in the final round, rendering them useless.

Interior Warehouse – Day
Mr. Black, Deacon, and Yoko pace impatiently waiting for the rest of the gang to arrive.
The camera pulls back to reveal Nikita leaning against the doorway, holding an old style back leather bag.
Nikita: Miss me, darlings?
Surprised, all three pull their guns, pointing them at Nikita
Nikita: Now, is that any way to welcome someone bearing gifts?
Nikita slides the bag across the floor, all eyes follow it as it tips over, spilling its contents of Diamonds and Cash. As the camera pans back to Nikita, we see the black bag was hiding her gun which is now pointed directly at Mr. Black.
The camera moves into a Close up Mr. Black
Mr. Black: It doesn’t have to go down like this.
Yoko: Oh, I think it does.
As Mr. Black steps out of his Close up, we see Yoko is now training her gun on Deacon.
Deacon Smiles.
Deacon: Are You going to bark all day little doggy, or you going to bite?
Scene slowly fades to Black.

I know what you are thinking (Well, besides that I shouldn’t just steal a line from Reservoir Dogs all willy nilly), we all know this scene or variations of this scene. Hell, it is required by law to appear in every Quentin Tarantino, John Woo and Robert Rodriguez movie. The “Mexican Standoff” is a cinematic staple, one that Cash and Guns encapsulates in one shell casing.


Supporting four to eight players, loaded with foam guns and virtually begging you to yell out your favorite movie lines, Cash and Guns is solidly a party game. Hell, you can’t open the box without someone grabbing two guns and going Chow Yun-Fat on the entire table. After bemoaning the fact that even freaking foam guns in a freaking board game need those freaking orange tips on the freaking barrel, you can lay down the rules in less than two minutes and break out the guns for fun. Everyone is given a pistol, a character standee, and eight cards (one for each round of the game). Of these eight ammo cards, five are “Clicks” and three are “Bangs.” While you certainly didn’t bring a knife to a gun fight, you sure didn’t bring enough ammo. Instead of filling everyone full of lead, you are going to have to bluff, bully and bullshit your way through.


Each round the loot is spread on the table. A mix of cash, artwork, and diamonds appears with a sprinkling of game altering cards thrown in. After everyone eyes up the prizes, they pick either a “Click” or a “Bang” card to play this round. After a count of “1,2,3…” everyone points their gun at another player. You could find yourself looking down the barrel of a gun (son of a gun, son of a bitch) while trying to get paid, to get rich. Or you could mercifully find all the other players leveling their weapons at someone besides you. If you are the latter, feel free to breathe easy…for a moment. One of those afore mentioned game altering loot cards is “The Godfather Desk” Having it in your possession at this point allows you to use the Godfather’s Privilege: To tell one person to point their gun at someone else (Protip: try not to smirk when you do it, it will come back to haunt you.). Next, it is time to put up or shut up…or stand up or lay down…or run or gun. Use whatever metaphor you want, the game calls it “Courage.” Once again the Godfather counts “1,2,3…” and players either keep their guns leveled and yell “Banzai!” or take the better part of valor and lay down their weapon. If you lay down your weapon, you are out for this round, you don’t get a portion of the loot…but you also avoid the chance of getting wounded and you do not have to reveal which card you played (Click or Bang). Everyone who is left reveals their card. If it is a “Click” nothing happens to the person they were pointing at. If it was a live round, or “Bang”, that player is wounded and is out for this round. The players who are left unwounded and still on their feet, take turns picking from the loot. Once that is finished, you deal out new treasures and start the next round. Be warned: Wounded players stay hurt and if they accumulate three wounds during the game, the final credits will be rolling for that character.


I really like that, while you can teach this is a few minutes, it actually puts the game in party game. You get out what you put into it. You can happily play along mindlessly or you can watch what cards your opponents reveal, weigh the options of picking a high payout loot item versus taking a Medical Kit to heal any wounds you took in earlier rounds. Or maybe someone is keeping a close eye on you and knows that you have burned all your “Bang” cards. It might be time to pick up a Clip card from the loot pile, allowing you to swap one of your remaining “Click” cards for “Bang.” If you wish to make the game even more tactical, special player power cards are included. These are given out at the start and provide players special bonuses throughout, such as take a Bang Card anytime someone else takes one from the loot pile.


Player elimination can be a serious blow against any game, especially party-styled games. While Cash and Guns does have elimination, it tends to be a rare occurrence. It’s blatantly obvious when you are in danger of being taken out, so it’s false bravado or faulty math (they all have clicks, right?) leading to your demise. You can’t win the game if you are dead and pulling out a victory could come down to being the last one standing when the smoke clears in a single round, allowing you to take ALL the loot. Everyone always feeling like they are in the running makes for a tense and entertaining game. If you do happen to get eliminated, you are probably only looking at a few minutes of downtime; best spent explaining why everyone needs to take out that conniving player who removed you from the proceedings.

Yes, this is Cash and Guns. It does involve pointing little foam guns at each other. But the guns are comical and the art work, care of John Kovalic of Dork Tower and Munchkin fame, is lighthearted. If anyone can manage to be offended by this, I’m sure armed intruders killing aboriginal species and stealing their resources and wealth in those evil Dungeon Crawlers will be their next target. How can you resist a game that allows that inattentive player who keeps checking his phone and saying ”Huh? What? “to have a gun pointed into his face and a full Samuel L. Jackson rendition of “Say What again. I dare you. I double dare you….” to take place?
W
WadeMonnig Top 10 Reviewer 195 reviews
Comments (0) |
April 02, 2020
Rating
3.0
So it's pretty fun to go pointing foam guns at other people, and you can play your role and trash talk to your heart's content. But the actual underlying game here is a little bit weak, especially with a limited bullet stash. It's normally quite predictable who's going to get shot and when.
MT
Matt Thrower #1 Reviewer 286 reviews
Comments (0) |


Anyway, this game is great, light fun. A party game where you'll point orange foam guns at each other, threaten and talk shit, and try to walk away with a wad of cash. It takes three minutes to teach someone how to play.


Plus you get to point your gun at grandma, possibly in retribution for putting too much onions in the turkey and stuffing again.


Definitely a classic. A little lightweight, but still solid fun. A staple for an Ameritrasher's game library.

KB
Ken B. Top 10 Reviewer 83 reviews
Comments (0) | Was this review helpful to you? 0 0
"I will wear your skin like a disposable diaper."
August 16, 2019 (Updated: August 16, 2019)
Rating
3.5
Great party game, as long as everyone knows how to swear like a nine-year-old FPS player and has a nutsack full of bile-spitting shrews. You can't just point a foam rubber gun at someone and say "Tee-hee! I will shoot you" and expect to get anything done.

You have to jam it in their eye and scream an invective-laced jeremiad with wishlist components involving their immediate relatives, their pets, flensing knives, suicide, and an eternal afterlife of ear-necklace servitude.

My kids will never, ever see me play this game.

Cleopatra and the Society of Architects
4.0
RB Ryan B.
"I actually enjoy Cleopatra as a game and think it..."