Less More
01 Dec 2021 10:20 #328409 by Not Sure
Replied by Not Sure on topic Leder games Oath chatter
I had what might have been a boring game, especially for someone new. I was late in the turn order, and some visions popped out early so the world deck was expensive.

However, I was sitting on a great place to cycle cards, the Great Slums, and it just let me work the decks. I used the Oracle to go fish a vision out of the world deck (which was at least 12 cards down when I did), and started trying to assemble Secrets for that. However, someone else made a Darkest Secret play earlier in the turn I was going to go for it, and the resulting Vision panic made everyone start stocking up on Secrets. I was going to lose that race, so I started cycling the world deck at 4 each again for cash, and came up with a play to acquire 7 favor (plus 1 I had) on one turn. Now I'm the Oathkeeper, and the game suddenly took off.

It was very much a social over military victory, concentrating on Hearth in the Great Slums to win over the masses. (after I couldn't win by Secret treachery!)
The following user(s) said Thank You: Gary Sax, sornars

Less More
15 Jan 2022 13:18 #329829 by Gary Sax
Replied by Gary Sax on topic Leder games Oath chatter
I think a thing about Oath that stands out to me over other more and more ubiquitous card combo centered games is that the entire game system is designed to maximize the extent of contextuality of all the cards in the system.

Saying that the value of different cards is contextual is a comment made about most games---so this is mainly a question of degree. The entire Oath system (Oath, Visions, board layout, economic layout/bank volumes) of this game is designed to make card value completely contextual. It really leans into you recognizing (or not recognizing) the relative value of a card or combo of several cards based on game state... but to a degree that I think is almost unparalleled in other games. It's the part that can make you feel good and clever when you play a game of Oath where you had a chance or an angle.
The following user(s) said Thank You: Jexik, sornars

Makes me interested to see what he does with Arcs.
The following user(s) said Thank You: Gary Sax 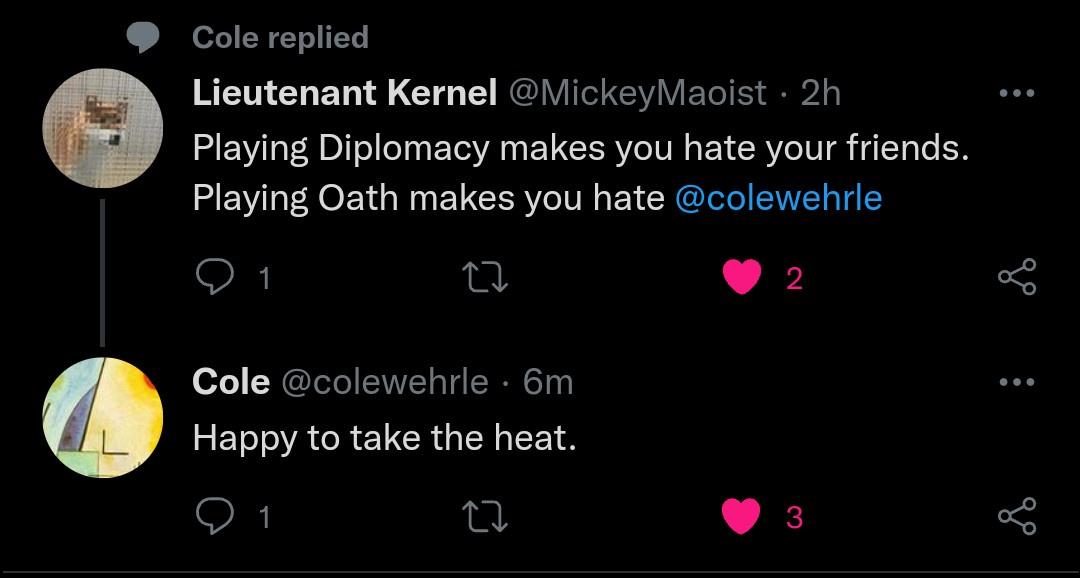 The following user(s) said Thank You: Not Sure, Nodens

Less More
01 Feb 2022 17:19 #330339 by Jackwraith
Replied by Jackwraith on topic Leder games Oath chatter
So, we started a new chronicle recently. The first game was about everyone acclimating and ended up with an Exile winning with Darkest Secret. The banner changed hands multiple times, via campaign and recovery until someone locked it up on round 6, along with the Vision. They'd used Storyteller multiple times to accumulate Secrets on it and had a sizable force on their board, leaving no one in position to wrest it away again. They only ruled the Slums with a single denizen, though, so the board was pretty wide open.

We played the second session last night. We had both Buried Giant in the Cradle and the Narrow Pass in the Hinterlands, which led to a bit more maneuvering. The first game winner had been heavy in Discord, so we had that added to the deck and it showed up. They had Boiling Lake at Standing Stones in the Provinces, along with another Discord denizen, which made them difficult to pry out and the Visions came out quickly, which made Searching outside the discard piles problematic. Indeed, the Provinces discard pile emptied out around round 5. I was the spoiler in that I stole away the Darkest Secret in that round, preventing the endgame rolls, and also emptied the Discord bank, which was loaded, utterly disrupting the current Chancellor. Soon after, another Exile took People's Favor, which was his Vision (mine was the often near-impossible Conquest), which led to the struggle over who's going to be the kingmaker/spoiler. We reached the end of the eighth round and the former Chancellor won with the Darkest Secret vision, so we're still on that Oath for next time. While the first session left the other three players a bit uncertain about whether they really liked it, I think this time cemented their feeling that this is a great game with a lot to explore.
The following user(s) said Thank You: Gary Sax, sornars

Less More
26 Apr 2022 11:21 #332563 by sornars
Replied by sornars on topic Leder games Oath chatter
I feel like most of the folks paying attention to this topic are already members of the Leder Games Woodland Warriors discord server or have backed the Oath Kickstarter but in case you're not:


Finally, I wanted to let you all know that we are in the early stages of designing an expansion for Oath. There are other projects which are taking up most of our studio bandwidth at the moment, so we won't have a lot of details to share for several more months, but there are some exciting things in the works!

Less More
26 Apr 2022 11:28 #332564 by Gary Sax
Replied by Gary Sax on topic Leder games Oath chatter
That's incredibly exciting, last thing I saw on it was their monthly twitch stream where they were much more non-commital than that!

Maybe that will change as more leaks out (and of course I'll be buying it for the Wehrle shelf), but I'm more interested in seeing a new design than extra stuff in a game that's truly pretty thick already.
The following user(s) said Thank You: Gary Sax, sornars