Less More
11 Aug 2019 12:13 - 11 Aug 2019 12:39 #300654 by Disgustipater
Design help for TI4 component was created by Disgustipater
I'm looking for some design help with a Twilight Imperium component I want to 3D print. A secondary group I play with uses a game spinner to keep track of turn order and who has passed. It's a very basic thing: a cardboard circle divided into 6 numbered sections, with each player's control marker in a spot. A plastic arrow spinner is moved to point at who's turn it is. When someone passes, their marker is just moved to the very edge of the section. I am looking to make something a bit more...cool.

Here's what I have so far: 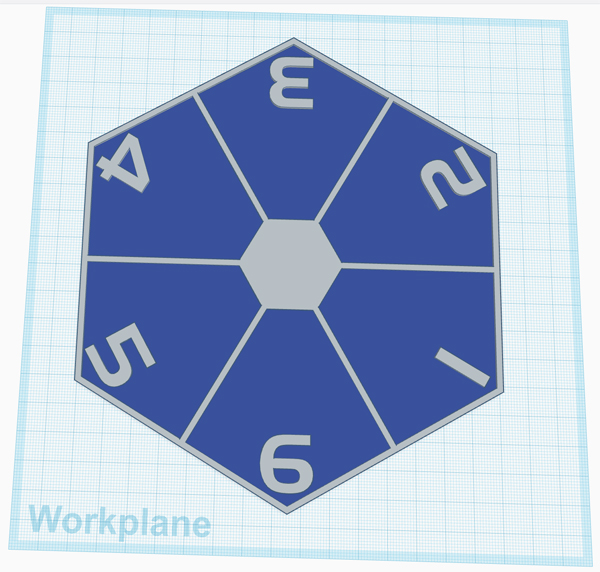 The gray portions are raised areas off the blue. Size is 150mm (~6 inches) from flat edge to flat edge.

I'm having trouble figuring out the best way to show someone has passed. My original thought was to have a double sided (red and green) shape sit at the bottom of each section and flip to red when passed. Trying to simplify it, I thought about cordoning off a small area with gray border (maybe red?) to move the marker to as the 'pass zone', but the shape makes it weird. I originally had the section lines go to the corners, making pie slice shapes, and had the numbers up near the center. I felt like it left too much empty space at the bottom. I thought about making the center hex larger and moving the token up on that little shelf, but thought the large blank space in the middle might look weird. I also briefly considered a hexagram for the overall shape. I feel like I'm just flailing around at thing point.

Anyway, does anyone have any thoughts or suggestions? Whether it is to support one of my existing choices or to suggest a complete overhaul, I'm open to anything.
Last edit: 11 Aug 2019 12:39 by Disgustipater.

Less More
11 Aug 2019 14:17 #300655 by Jackwraith
Replied by Jackwraith on topic Design help for TI4 component
The Others just uses a set of markers for each hero and the Sin player. Heroes have two actions per round and have two markers to display them; blue on one side, gray on the other. When you take your action, you flip one over. That way, it's on everyone to take of their own business and doesn't take much table space.

Less More
11 Aug 2019 21:26 #300659 by engineer Al
Replied by engineer Al on topic Design help for TI4 component
Building on what Jackwraith just said, all you really need is a small token that says "pass" on it that gets placed on the dial. It you are worried about it moving around maybe a small hole on the outside edge that gets a pin stuck into it?