I dont know what is worse...

Less More
16 Nov 2015 15:50 #215162 by flim_flam
I dont know what is worse... was created by flim_flam
The fact that DC yanked Frank Miller out of deep freeze to work on Dark Knight III or the fact that they are literally producing FIFTY THREE variant covers for it. Both say something about the sad state of affairs at DC.
The following user(s) said Thank You: jeb, Gary Sax

Less More
16 Nov 2015 16:07 #215170 by Legomancer
Replied by Legomancer on topic I dont know what is worse...
How about the fact that they'll sell the shit out of that dumb thing.
The following user(s) said Thank You: jeb, Gary Sax

Less More
16 Nov 2015 16:50 #215174 by Michael Barnes
Replied by Michael Barnes on topic I dont know what is worse...
People- both "fans" and the people that make/market this kind of thing- will never understand that when something like The Dark Knight Returns comes out, it's a once in a lifetime thing. I remember picking up the first issue and having NO IDEA what I was in for, it was just a new Frank Miller Batman book. It was also something of a cultural flashpoint, the kind of thing that comes out at just the right time to capture a certain zeitgeist or atmosphere. Literally lightning in a bottle. But that kind of phenomenon is ephemeral. Its effect may be lasting, but you can't repeat it because so much of it was NOT ON PURPOSE. Frank Miller did not sit down thinking "I am going to write a comic book that will redefine Batman and influence the entire medium for decades to come". No, he had what he thought was a good idea and had the right folks lined up (like Lynn Varley) to make it something special. But at no point was it manufactured to be a "second attempt" at previous success.

So when the folks at DC thought back in the early 2000s "let's do another Dark Knight with Miller", it really showed that you can't think about it that way and what's worse is that you can't engineer a phenomenon with all of the marketing in the world. And Miller turned in a completely half-assed, TERRIBLE book because he- as an artist- probably understands that you don't crank out a DKR to meet fan demand or the whims of DC's corporate or editorial leadership. Things just line up right, including where the audience is at that particular time.

Same thing with Watchmen. It should have been left preserved in amber, immortal in its moment. But no, "Before Watchmen"..."hur hur, I want to see what The Comedian was doing BEFORE the story...because I'm a nerd and I can't stop consuming media, feed me more".
The following user(s) said Thank You: jeb, Gary Sax

Less More
16 Nov 2015 17:26 #215181 by jeb
Replied by jeb on topic I dont know what is worse...
Is he relevant at all anymore? Is this like one of things where I am supposed to nod and act like I appreciate PEANUTS even though its run was shitty for literally my entire life?

Miller is washed up and everyone hates him now. But I'm still on board despite it all. His last book "Holy Terror" was absolute shit BUT it was BY FAR the most experimental, expressive, individual and amazing comic to look at that whole year.

I loved DKSA (not as much as DKR but so what? There's very few comics I do). I really did. It was big, stupid, silly and completely over the top. But it looked great, Lynn Varley experimented with colours in some fascinating ways (she's always been my favourite part of Miller's work-and she's what makes 300 so fucking amazing). The look of a comic is at least half of what makes a comic great. It is a visual medium and when I think of Jack Kirby I rarely think of the writing. When I think of Neal Adams Batman run I can't even remember who wrote that shit and when I think of my favourite Flash Gordon comics I have no clue who wrote that shit.

I just remember this:

Who needs J.H. Williams or any of these fancy new hyper realist artists in comics when it's already been done. Miller is after something else with his art, I still love looking at it. I know everyone hates DKSA but when I think of it I think of moments where Frank and Lynn worked together to makes something new like this:

I get that everyone hates what he does. I don't. I admit the writing is shit but his art remains more interesting than a thousand shitty little pretentious art house comic makers who write like they've read too much Sartre. None of them, with the possible exception of Chris Ware, has ever done anything nearly as interesting as the art that Miller creates - even with his shit writing. Holly Terror was a critical disaster, a bomb, I bought it at 25% of the list price it did so poorly. Yet I remember pages from that because visually they say more than anything any of these arty farty writers can do with their mediocre writing (again, except Chris Ware). This is an average page, not even a top ten entry (the best being his fading faces representation of 911 that remains the best comment on that disaster I've seen in any medium at all), from his critical disaster - his worst book supposedly. You may not like it, but it's as distinctive and original as anything anyone is doing in comics and more instantly recognizable than anyone else working in popular comics today. He's still the best looking artist on the shelf.

That's Miller alone, here he is with Varley:

With all that said. I heard that he might not draw this instillment, that perhaps Jim Lee (the fucking idiot who draws nothing but hot women and muscle bound men) will. In which case count me out entirely. I may pick up a cover that he does himself but that is it.

Seen in a comic book store, Miller's work jumps out at you from a sea of samey looking artists who will never develop nearly as original a style. Never mind several different styles. This post alone shows that each book clearly has it's own aesthetic. I can't think of anyone doing that right now. 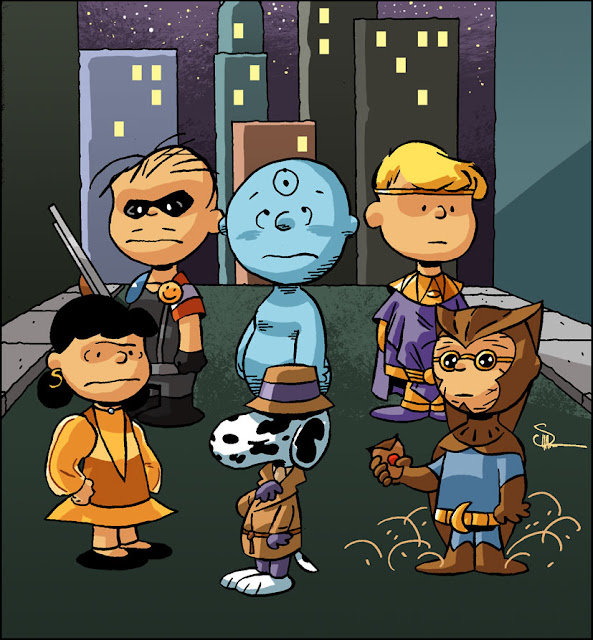 Less More
16 Nov 2015 18:28 #215189 by Jackwraith
Replied by Jackwraith on topic I dont know what is worse...
When it comes to innovation, I actually think it's more interesting to look at Miller's Daredevil work than it is to DKR. I mean, certainly, the production values of the latter and Miller, Janson, and Varley all working at the peak of their powers make it what it is. And, of course, the fact that Miller clearly had a vision for what this thing should be is what makes it that "cultural moment" that MB talks about. Miller had been mugged, repeatedly, while living in NYC and this was answer to what he felt was the inability of the establishment to deal with the problems on the streets. This was his "citizen strikes back" moment and it worked because it, like Watchmen, touched on themes that were formed out of widely held opinions, whether true or not. What I find most interesting about Watchmen is the undercurrent of disdain for the culture that Moore injected into it, mostly through the Comedian, but also through the despair of Night Owl and the unfulfilled expectations of Silk Spectre. In a way, it was a touchstone for what has become the attitude of many young people toward the "American dream." Of course, most people just remember the Cold War stuff and the aliens and how it was "grim and gritty" superheroes done well and so on. What a lot of people don't remember is that Moore always said that his personal favorite among his work was Big Numbers, which is mostly about the construction of a strip mall.

Dark Knight Returns is in that same vein. Miller was saying a lot of things about the culture, many of which I don't agree with, but which I was glad to see stated, especially in such a gripping and dynamic way. It wasn't just "Old Man Yells at Cloud." It was "Old Man Yells at Clouds and Thunder and Lightning and then takes on both the chaos on the streets and the corruption that lets it happen (as he sees it.)" But it was a statement that really only needs to be made once. Doing it again is just trying to harvest dollars, which is the same problem DC has had for decades. They don't produce original stories about Batman and Superman and Wonder Woman because there really are no original stories to be said about archetypes. They just harvest dollars from trademarks. The good stuff comes from places like Vertigo that still have unusual or even innovative perspectives that don't depend on things that (to borrow a line) should have been preserved in amber a long time ago.

And why 53 different covers? Wasn't it supposed to be "the New 52"?
The following user(s) said Thank You: jeb

Jackwraith wrote: And why 53 different covers? Wasn't it supposed to be "the New 52"?

Yeah, but this is one louder.
The following user(s) said Thank You: Jackwraith

Less More
17 Nov 2015 00:17 #215221 by Shellhead
Replied by Shellhead on topic I dont know what is worse...
Comic book writers eventually burn out. They run low on ideas and repeat themselves, and eventually they are gone. Comic book artists often have trouble delivering quality artwork in a timely manner when they get old. They either get really slow, or they cut too many corners and get sloppy. Frank Miller did some amazing work early in his career, but the quality of his writing and artwork have declined dramatically over the years. His current work looks more like self-parody than a decent effort.

Less More
17 Nov 2015 09:51 #215227 by Joebot
Replied by Joebot on topic I dont know what is worse...
My problem, is not with Miller's ART nearly as as much as it with MILLER. I find his political views to be repugnant. He's an angry, hate-filled, bile-spewing blowhard. In his case, it's impossible for me to separate the art from the artist, and I simply refuse to give him any of my money. I have the same problem with Orson Scott Card, who I find equally repulsive.
The following user(s) said Thank You: jeb, Legomancer