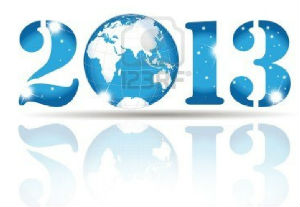 Every year I like to indulge myself in a slightly more personal article about how I'm feeling when it comes to gaming and writing and the year gone by. Not too much detail, of course: I'm British and as we all know, the British never talk about their feelings, only moan about the weather, the loss of empire and how other nations constantly misunderstand our wonderfully self-depcreating sense of humour. But if you're expecting someting a little less insular and game-focussed well, you have been warned.

Regular and observant visitors to the site will have noticed that I've slipped a long way from the weekly schedule I upheld at the beginning of the year. There's a lot of reasons for this. Partly it's because I've had a tough year, with a lot of real-life things occupying my time. Partly it's a lack of inspiration - I feel I've covered most of the big topics that originally motivated me to write. But those aren't the big issues.

I said toward the end of last year that I thought 2013 was a bad year for board gaming, and got a fair amount of opprobrium as a result. It's 2014 now and I've played some of the games that everyone was feting at the end of the previous year and I still think it was a bad year for board gaming. I've yet to get round to Pathfinder (which doesn't sound my cup of tea) or Space Cadet Dice Duels (which does) but I don't think two games are going to transform my opinion of the whole year's crop. I still think the best games I played last year were reprints - Sekigahara and Circus Train.

It could be that I'm just getting tired of board games. But I've looked at that feeling, and looked at it again, and it just 'aint so. I still love playing board games and seek out opportunities to enjoy them. It's just that increasingly I'm motivated to play what I've already got rather than look at new things.

I long ago formed a belief that board game design was a generally process of iterative improvement. Fantasy adventure board games of the early 90's were generally better than those of the 70's and 80's. And games like Mage Knight and Descent 2nd edition have come to trump those in turn.

But after the influx of creativity that came from combining European and American style games into something new, the process has slowed. Newer games are generally still better than their counterparts of a few years ago, but not a lot. And as a result I've found my appetite for taking the time to punch and sort, learn and teach, play and explore newer titles has waned. I'm more curious about completing expansion sets to get the biggest punch out of the games I already know and love.

There are exceptions. I've hugely embraced the creative storytelling aspect of board gaming because it brings something utterly unique to the experience, something that video games and to some extent even role-playing games cannot do. And by storytelling I mean it literally: I'm talking about games like Once Upon A Time which revolve around the players actually telling stories. Winter Tales and Story Realms both look like hot tickets to me this year.

The other exception is the endgame of a process that our own Peter Putnam predicted would happen some years back: I'm slowly turning into a more dedicated wargamer. Increasingly the games that catch my eye are light(ish) consims that cover interesting bits of history I can't already game through my collection. My brief on Shut Up & Sit Down to cover wargames has increased the pace, but I was already a fair way down the road - otherwise I'd never have had the knowledge to write a decent genre reivew in the first place.Â

So, now you know what I'm likely to be writing about this year, we can go back to last year. While it's been a difficult time personally, it's been an amazing time professionally. What started out as a tiny trickle of welcome additional income from reviewing children's games on iOS has exploded into a regular second income covering video games generally on both mobile and PC. I've even had a few commissions writing about actual board games.

I love this site, and its community. But to be honest, delightfully alluring as you all are, you can't quite hold a candle to a solid paycheque. And as I've gone further and further down the paid route I've realised a lot of the stuff I used to write here was guff. Opinion style pieces are easy to write but worthless without research, external opinions, evidence. Reviews that deconstruct games mechanically are easy to write but worthless without critical insight, a clear reviwer's tilt and some emotional resonance.

But writing things like that is hard. It demands concentration, planning and effort. And the older I've got, and the more my free time has dwindled, I've become increasingly unwilling both to put in that time for nothing, or to toss off articles without putting it in.

It's not all bad news. I still regard a review copy as payment in kind for writing reviews, so there's still good motivation for writing reviews. And I remain happy to toss off articles on subjects about which I know little but you all enjoy - comics, films, TV - as an excuse to link back to what I get paid to post elsewhere.

Am I sounding like a spoiled little rich boy? Maybe. I apologise if so. But I am planning to do something about it.

Firstly I'm going to try and take up a little of the slack by filling in with some brief revisits to games I've already reviewed when I've got nothing else to post of a Monday. Board gaming could use some more retrospective reviews, so I think there's value there.

But secondly, and perhaps more interestingly, I'm launching a crowdfunding effort to try and get a little cash in return for devoting time to proper board game articles: well-planned reviews, in depth-intereviews, properly reseached opinion pieces. Kickstarter is product focussed and isn't really the place for that sort of thing, so instead I'm using Patreon, which can be configured for people who are looking for small monthly fees instead of a grand total.

You can see my pitch here. If you like it, please consider spreading it around, or even signing up to contribute. Because if it takes off, you know where the articles that get commissioned as a result are going to end up, right? Here, on the Fortress. And with any luck they might bring some of the wider world along with them,