As in previous years I´ve put up my list of games to watch out for in Essen at boardgamegeek.com.

I have started my preparation with Pete Ruth's excellent report on GenCon and I am adding games from Eric Martin's preview list as they appear.  I'm also taking account of opinions and reviews from some people who've played the games in the run up to Essen, so you might want to check back once in a while. Your suggestions are also more than welcome!

I will be tweeting from the show as @jurdj on the Thursday and Friday and post a few pics if time allows. And Saturday on the way home we will play a few of the games we bought. In the run up and afterwards I will also post here at the Fortress.

Last year I went full on with this list of interests at boardgamegeek. I followed up that list with a bunch of blog posts before and after the show (or read my F:AT summary). I might not be as prolific this time.

So far I'm interested in the Mice & Mystics expansion. The Wreck Age minis look good, but I'm at least going to wait till it's affordable. The Pathfinder coop RPG sounds great. And then there's the Fireflygame (although I never saw the show), the Blackwater Gulch western shoot out miniatures and Bioshock: Infinite, yes a boardgame of the videogame.

What I fear is that this year Essen will  have more kickstarter/indiegogo stands, and fewer games in real development. That would change the atmosphere of the show. Anyway, not having a huge to-do list might actually make me more relaxed, even more so in the week after the show. 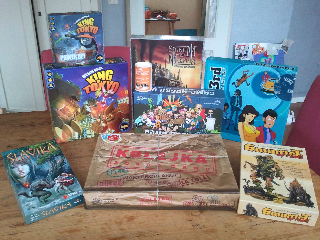 I'm on my honour to play every game I bought last year at least once and although I've managed Slavika and Kolejka once, and King of Tokyo and Gauntlet of Foolshalf a dozen times, Camp Roskildehas not been played since Essen. It leaves me with two games to play in the next two months:

The trouble in both cases is that I need to invest in reading the rules.