I played two games of Age of Renaissance in the last month. It had been almost a decade since we last played it, so we all had to have a good look at the rules. Although rusty, we were back up to speed by the end of the first evening. 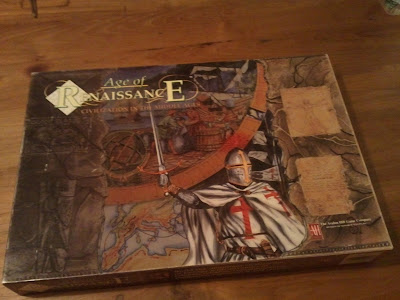 Age of Renaissanceis an Old Skool Ameritrash game by Avalon Hill. As suggested by the title, the game is set in the period leading up to the Renaissance, starting in the 8th century. The game is not about empires conquering territories but about trade metropolises dominating markets. The trade empires are Venice, Genoa, Barcelona, Paris, London and Hamburg.
Movement by sea is the best way to expand your trade empire. You start out with slow galleys that have to hug the coastline. Although you can extend the range (and carrying capacity) of your galleys, improving shipbuilding technology first removes range limits, first to all of Europe, then to the East Indies and finally the New World. 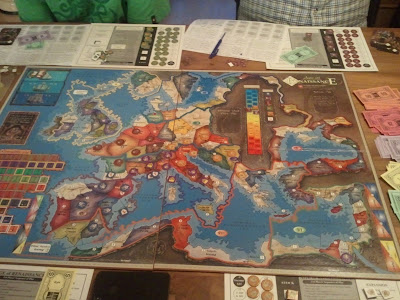 A familiar map, very early in the first game. With five players, Hamburg (and the Baltic and Russia region) isn't included


The map is asymmetric with the most high value areas in the Levant (the eastern board of the Mediterranean), the Black Sea and East Indies and New World. This favours Venice and Genoa, because they are closest to the Levant and the Black Sea. It also means Paris, Hamburg and London should be aggressive (or locked out from the juicy bits). 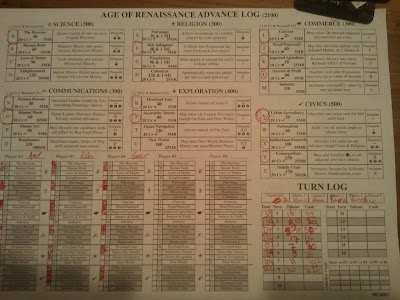 My list of technological advances, about 3/4 into the game
In the right corner below, you see my biddings

The game mechanics are a development on the original Avalon Hill Civilization, and similar in feel but a bit more complex. Like in Civilizationthere are trade goods where the value grows exponentially the more you have, there’s a tech tree and conflict is abstracted and requires a minimum number of counters to engage.

The trade goods are not based on cities but on areas on the map you control and they each produce different goods like timber, wine, spice and ivory. The tech tree is a bit more structured and expanded, and all the technologies now provide benefits in the game. And conflict is influenced by control of neighbouring areas and technology. 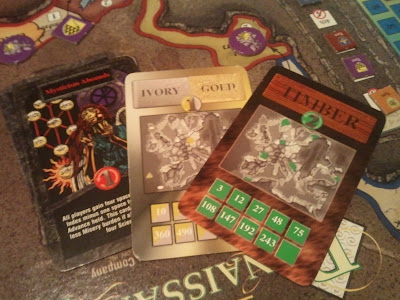 The major change to the game as opposed to Civilization is the addition of event cards: you can play them to score trade goods and bonuses on technology or tactical advantages in conflict. There’s also a number of catastrophes such as famine, epidemics and religious strife that will increase the misery of your population.
The Misery track is another addition to the game. As a result of catastrophes and certain technologies, your people will suffer, and at the end of the game, misery will cost you points. And the higher you are on the track, the bigger the steps, so the harder it becomes to reduce misery. Money and some technologies allow you to reduce misery, but it takes some effort to keep on top of it.

The event cards can be very powerful: scoring a high value trade good or a good leader bonus can buy you an extra technology, a tactical advantage can make you win two more areas. And a catastrophe can lose you half your money. Pretty powerful stuff that can determine the outcome of a game and will have players arguing whether the player targeted is the one in front or not. 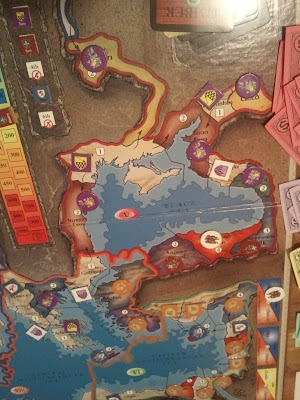 The Black Sea and the Levant, cornered mostly by Genoa and Venice in the four player game

Your basic economy depends on the number of areas you control, but as said above the type of area makes a difference when trade cards are scored by playing event cards. The value of your harvest is determined by the square of the number of areas you hold in that trade good, so monopolies can be very profitable. It’s not possible for all trade goods and sometimes it’s better not to monopolise a good because other players won’t score their cards if you’re the only one benefiting. On the other hand, if you have a trade good card yourself and you can try to collect a few more areas to improve your haul.

As an old skool Ameritrash game, it has many of the flaws associated with the genre. The game is long, taking 5 to 6 hours with 4 players (longer with more players) but that also increases the sense of epic achievement by the end. There is the possibility of a runaway leader if nobody goes after him and it is prone to king making. Like Civilization, there’s lots of calculation going on to optimise your score, and that is something not everybody likes to do in their spare time.

The game is also different with fewer players. There’s too much room in a 4 player game, while 5 players is too hard on Barcelona (with London breathing down its neck). I would like to try six players sometime again because that might be the best balance.

Were it designed or republished today it would be more streamlined to fit into 3 hours. I should try the recent Romanian game Warriors & Traders to see how that works, because it basically has the same theme. But despite all its flaws Age of Renaissanceis still worth digging out once every couple of years and probably a great game when you're in school or university and have more time to burn.