The Legend of Robin Hood - In Brief 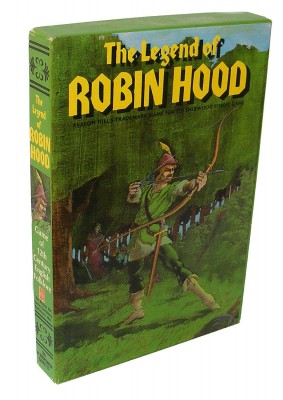 I find it a lot more satisfying to discover a great 25-year old game than I do to pick up whatever the new “buzz” game out of Essen happens to be.There’s something inherently rewarding about digging up a game that’s been cast aside by assumed progress in game design idioms and left for dead, yet still remembered chiefly by the long-standing veterans of our hobby.So many great older games have been forgotten in the rush to find the next PUERTO RICO- I often wonder if most gamers have any sense of history regarding the hobby, something I think is essential for providing a frame of reference in really appreciating where the hobby is today and where it was before SETTLERS OF CATAN.So let’s go back to 1979 for this one and have a quick peek at the Avalon Hill/OSG gamette THE LEGEND OF ROBIN HOOD, a one-hit wonder from Joe Bisio.

As you might expect given its title and pedigree, THE LEGEND OF ROBIN HOOD is actually a sort of light 2-player wargame depicting the titular feathercap and his band of Merry Men engaging in guerilla style, hit-and-run thefts on bishops and nobles trying to make their way through Sherwood Forest while the forces of law an order (represented of course by the Sheriff of Nottingham, Sherriff Lincoln, and Guy di Gisbourne) try to stop the flow of money from rich to poor.It’s a terrific, somewhat under-explored theme and I’m glad to say that the mechanics are very specific in detailing it- bowstrings get wet when crossing rivers, Robin must have Alan A’dale and Friar Tuck present to marry Maid Marian, and there’s even the classic archery contest on Nottingham Green.

The game is fairly simple. The design cornerstones are an area movement system with some minor terrain effects, a simple archery/melee/personal combat structure, a very simple command/recruitment system used only by the Robin Hood player (strangely similar to WAR OF THE RING), and a basic mechanic to put the nobles and bishops on the board (marks, if you will) and move them.The rules are brief and mostly clear although combat is strangely vague in places and I’d say that the average gamer could have this up and running in 30 minutes of opening the box.One of the most fun things about the game is that it’s totally assymetrical- the Sheriff player plays completely the game in a completely different way than the Robin Hood player for obvious thematic reasons and the result is a really tricky, captivating cat-and-mouse game that finds Robin Hood and his cronies constantly dodging the law while looting castles and committing highway robbery.The Sheriff player gets the pleasure of hanging captured outlaws and dropping in on local villages with armed soldiers to round up tax revenue.It’s a fun, solid little game that plays in about 90 minutes but it’s the kind of thing where if Robin Hood gets caught early, you might be looking at a 20 minute game.

THE LEGEND OF ROBIN HOOD is a great choice if you want to play a light wargame but want something with a little more panache, maybe a little more narrative.It’s also a perfect pick if you like the Robin Hood theme since it realizes it so well and so specifically.If Ameritrash means reclaiming some of the things that were lost to the rise of the Euro, then this is definitely one worth digging up again.