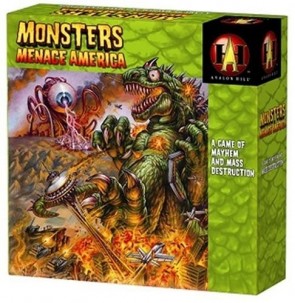 Every time we go to Gulf Games, one of my kids latches on to some game that they play there and as good gamer parents, we are obligated to obtain a copy for them once we get home. My kids know that this is one purchasing area where no arm-twisting or whining is required! Anyway, for my younger son Shea, that game one summer was Monsters Menace America. Happily, we were able to get a copy in a math trade on BGG, trading a copy of A Dog's Life that had been plucked off the Gulf Games prize table in the 3rd round solely for its cute rubber dogs. I tried this "dog" of a game (sorry, couldn't help myself) once and thought it quite flawed for reasons I don't remember. There were tweaks, I think, posted online but I couldn't be bothered and onto the trade pile it went. The trade replaced the cute rubber dogs with cute rubber monsters so it seemed pretty even. Unfortunately, as always, once home the kids got back into their routine of computer and video games and couldn't be bothered by the quaint, old-fashioned type of the board variety. So, it's been sitting on the game shelves unplayed for about two years doing nothing more than providing a splash of lime green to my living room decor. I swear that eyeball on the side of the box is watching me every time I walk by.

I was glad to finally give it try when new guy Jeff suggested it. I didn't have high expectations but I hate owning games that I haven't even played. I popped the top off the required beer (but alas, we had no pretzels) and sat down for some "mayhem and mass destruction" as stated on the box. The game is really simple. Each player controls a monster and a branch of the military. You move your monster figure across a map of the U.S., stomping cities to increase your health and stomping major landmarks like the World's Largest Ball of Twine for infamy points. Infamy points can be spent to re-roll dice which comes in handy as you will be rolling LOTS of dice in this game. You can also go to places like Three Mile Island where your monster mutates and gains a new power. You randomly draw these from a deck of cards that includes such awesome mutations as Laser Beam Eyes or Atomic Breath. Your monster has a set numbers of spaces it can move each turn and there may be terrain restrictions.

Military units are used to simply harass the other players' monsters, bring down their health and discourage them from trying to stomp particularly juicy cities. You get to move your military units on the board each turn and you also have the choice of deploying more or doing military research which entails randomly drawing a card that can be played at the appropriate time to either help yourself or more likely, mess with somebody else. The research card deck includes all sorts of fun things. In our game, Jeff stacked a space with military units and then played the Blond Lure on Joey's monster. Unable to resist this sexy blond siren, his monster was forced to move onto the spot only to discover that it was a trap set by the marines who were waiting to attack. I was able to add Fusion Cells to my units, allowing them to move an extra space each turn. A few of the cards allow you to place and control a smaller monster on the board. There are all kinds of things in the deck.

Battles between monsters and military units are simple, with each unit or monster rolling a die and trying to equal or beat the defender's defense number for a hit, in which case it takes a specified amount of damage. Monsters get three attacks per round and if there are any military units left after two rounds, it has to retreat. There is no player elimination. If a monster's health ever gets to zero, he goes to Hollywood as an attraction. Once he gets a certain amount of health back (by rolling a die each turn) he breaks free to continue his rampage across the country. Too funny!

The point of all this is to try to beef up your monster for the big monster showdown at the end of the game. Once a certain number of stompings (not a real word according to my spellchecker) have taken place, the showdown will be triggered. This is a fight to the death with the player who triggered the showdown choosing who he wants to fight first. The winner of that battle adds the initial health of his opponent to his monster and chooses the next monster to fight. And so on and so on until one monster is left standing as the King of the Giant Monsters (it's in the rules, I swear) and wins the game. My monster, a pile of purple sludge named Toxicor, won our game, no doubt because he had mutated earlier into a robot that electrocuted his opponents in battle each time they missed. Zap!

I can easily see why this game got played over and over again by a pack of pre-teen and teenage boys at Gulf Games. It's perfect for that group. It has practically no strategy but playing it was a hoot, with lots of trash talking. It's simple and short, so it makes a good "beer and pretzels" style game and it captures the humorous, campy feel of the theme very well. This is the type of game that sends many of my gamer friends running away screaming so it definitely needs the right crowd. It's not the sort of thing I'm itching to play all the time, but I certainly had fun. A few extra beers or margaritas might enhance the experience as well. Just saying...