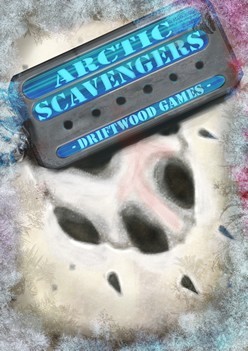 As the title suggests, I like ARCTIC SCAVENGERS a lot.

And with the themeless DOMINION winning the SDJ this week, I feel like I should champion what I think is the better game.

Why is it the better game? Because it is the more complete game and it has a exciting looseness and a sense of surprise that was all but developed out of DOMINION. Yes, it does use the deckbuilding and card drafting mechanics from DOMINION. But it is also its own game because the designer, Richard Gabhart, managed to (ahem) scavenge the core mechanics from DOMINION and create what is very much his own game with a pretty original an interesting setting. And there's actual interaction beyond listening to someone announce what actions they're taking for the round. The game is extremely good, and should not be dismissed as a simple "clone".

DOMINION is a great mechanic, no doubt. But a mechanic alone is not enough. and after months of play it became apparent that the SDJ winner lacks any sense of actual meaning-  it feels like a tech demo. DOMINION may have a greater variety of card combinations and variety due to the large number of cards, but ARCTIC SCAVENGERS is simply more fun, more meaningful, and actually has more possibility for expansion than its predecessor.