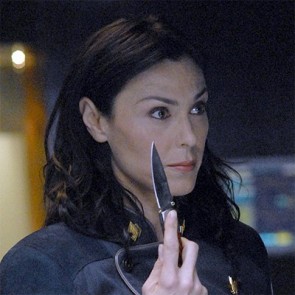 Game Name
Battlestar Galactica: The Board Game - Pegasus
Publisher
Fantasy Flight Games
There Will Be Games

Admiral Cain is awesome. And she's the first character picked in pretty much every game I've played of BATTLESTAR GALACTICA: PEGASUS EXPANSION.

Yeah, it's pretty great. A couple of the early reports I read were saying that the Cylon leader was a bad addition, but that's bullshit, it's a great idea and it's mostly implemented well. Some of the Cylon leader agendas are a little wack, but I really don't care. It's fun, thematic, and if you're blaming mechanics or card text for losing then you're playing the game for the wrong reasons anyway.

PEGASUS is good stuff, and I think that anybody who's been enjoying the base game over the past year is going to really dig the expansion. I think it's definitely not for beginners though, and if you've not played BSG yet (shame on you), then I would actively discourage you from doing so with the new expansion for about the first five to ten games. Otherwise, you're just not going to get the most out of it.

If you're a BSG newbie, I'd also recommend against it until you get through at least the third season. A friend of mine at Dragon Con walked up while we were playing and flipped through the character cards and had a plot element spoiled just from reading through ability text.

Will there be a final expansion? I bet there will be...and there's at least a couple of story arcs that I think will make for some great gaming in it. I just hope that they don't make the Aibo a playable character.

Oh, and it's completely awesome that Scar, the Cylon ace, makes a guest appearance in the expansion.