First impressions of LNOE: Survival of the Fittest 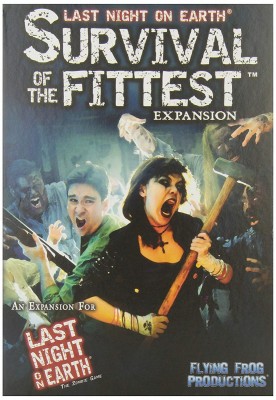 Game Name
Last Night on Earth: Survival of the Fittest
Publisher
Flying Frog Productions
There Will Be Games

My copy of the latest Last Night on Earth expansion, Survival of the Fittest, arrived last week. It's a smallish box, but it's crammed with a good amount of stuff; 4 scenarios, 5 counter sheets, 3 new decks of cards and about 8 each of new Hero and Zombie cards. I've only glanced through the rules and scenarios, but so far, I really like what I'm seeing and I'm looking forward to trying these scenarios out with the new stuff.

My first impression is that it seems like the new scenarios, combined with the new mechanics, make this more of an "advanced" version of LNOE, moreso than Growing Hunger, but for a LNOE fan looking for some more depth and variety, that's a great thing.

Here are some details...

There are 3 new decks, Survival Tactics and Unique Items (which benefit the Heroes) and Grave Weapons (for the Zombies). If a Hero rolls 5+ for movement, instead of Searching, they can draw either a Survival Tactics card or Unique Item card, depending what numbered building they're in (Unique Items = 1-3 or 1-2, Survival Tactics = 4-6 or 5-6, 3-4 = choice of either). So basically, any time you were going to search anyway, you'll have a 1 in 3 chance of getting one of those cards instead of the usual Hero card. And by and large, those are quite powerful...

A few of the Survival Tactics cards...

Several of the Survival Tactics cards are of the same type as other Hero cards, but the difference is that these cards, as well as the Unique Items and Grave Weapons, are never considered to be "Hero" or "Zombie" cards, and cannot be cancelled as such. And some of them include cool new elements like "Duct Tape", which allows you to combine two of your Items to gain the effect of both at the same time; "Use the Sewers", where you can add sewer tokens to the board to allow for faster movement (I like that there is a counter provided for being "in the sewer" which is placed off the board and which requires one movement space; I didn't like the idea of teleporting across the board between sewers, which is how I thought it might work from the original description... I also like that the Zombies can use the sewers as well); "Ammo Belt", which lets you put 3 Ammo tokens on it and discard them instead of discarding a Gun, or to add +1 to a roll; and "Barricade the Windows", which gives additional barricade strength (more on barricades below).

A few of the Unique Items...

The Unique Items offer some kind of bonus, and sometimes an additional bonus if a particular character has them. For example, Sally's Pendant allows its owner to discard it to cancel a wound, but also gives Sally an extra Fight die if she has it. Father Joseph's Bible gives any other player his normal ability to take a wound to attempt to cancel any Zombie card on the roll of 3+, and if Father Joseph has that, then he automatically cancels a Zombie card if he takes a Wound. I'm actually a little disappointed that there aren't more examples of that in the Unique Deck than there are; from the earlier description of this, I expected there to be more character specific bonuses like that, but a lot of characters aren't represented in this way and not all of these cards offer that kind of thing.

One of the Grave Weapons cards...

The Grave Weapons cards may be drawn by the Zombie player instead of spawning 2 normal zombies, and they give a specific zombie a particular ability, per the example above.  I really like the idea of these, because much as I like LNOE, one criticism I have is that the Zombies don't seem to have as much character or as many tactical choices as the Heroes.  This improves both of those things.

Barricades
SOTF includes several new or updated "dot" mechanics in the rulebook, and probably the most significant of those is for Barricades. Basically, when you are in a building, instead of searching, if your movement roll was 4 or higher, you can either erect a barricade or reinforce one. A Hero can also take a wound at the end of a Move Phase to build or reinforce a barricade. A barricade blocks an entire wall, and a zombie who wants to move through it must roll 4+ to do so... If a barricade has been reinforced (by adding a reinforcement marker), a zombie wishing to move through it only removes a reinforcement marker on a roll of 4+, but cannot move. Heroes can move through basic barricades but must pay movement points to remove reinforcement markers to move through. I like the way the barricades work... simple but effective, though I'm a little surprised that they are only worth 2 dots. I suppose the time and trouble it takes to build them offsets their usefulness.

As expected, all four of the new scenarios involve the new decks and include the barricade rules, and three of the four include direct involvement with the barricades as part of the setup or objective. Here's a brief description of the four scenarios...

HUNKER DOWN: The Heroes must fully barricade two buildings and spend at least 4 turns (not necessarily consecutive) with at least one Hero inside each barricaded building.

RESCUE MISSION: Four Townsfolk Allies start in a fully barricaded and fully reinforced (barricades can have up to 3 reinforcement markers) building on the opposite corner of where the Heroes begin. The Heroes must bring at least 3 of the Townsfolk Allies out of the barricaded building and over to the Hero safehouse. Without having played any of these yet, this one is the one I'm most eager to play... It sounds very challenging.

SUPPLY RUN: The Heroes start in the Manor House (which includes a new dot mechanic, Manor Deck; 10 cards that Heroes can search from while in the Manor House) and must pick up supply markers from other buildings around the board and return enough of them to the house.

SEARCH FOR THE TRUTH: You'll notice in the picture above that some of the Unique Items include letters (A, B, C). Those letters have no game implications other than for this scenario. The Heroes have to find two of the Unique Items with letters. The first record found determines the goal objective. For example, "A" equals "collect 2 explosives and get them to the final location." The second record found determines the final location, which is either the Farmhouse, the Plant or the Hospital. If the location isn't on the board, you find the board side with the location and attach it to the existing board on a random corner.

To me, the scenarios of LNOE are what make it really fun, as you can play the same basic system with different types of thematic challenges that make for unique situations and call for different strategies and tactics. These four scenarios seem to be well crafted with some creative elements that make good use of the new cards and the Barricades mechanic.

I got a chance to play "Supply Run" last night and it was a great introduction to the new material, and in particular the Grave Weapons, which my opponents used almost every chance they could and to great effect.  And while I originally had no intention at all of buying the set of Grave Weapons minis, having played now using the Grave Weapons markers that are included in SOTF, I can really see the value of the minis, because once you have several Grave Weapons zombies out there, it can be a pain to move them and their markers around all the time. I know people have complained about the price point of these new LNOE expansions, and I do believe that the Grave Weapons mini set is still a chrome or luxury purchase compared to SOTF or the Hero Pack, but I think that if you intend to play this game often, you'll probably find like I did that it was a really great thing that they made these minis available and that the price (which I've seen for as low as $16.21 from Boards & Bits) is going to be worth it.