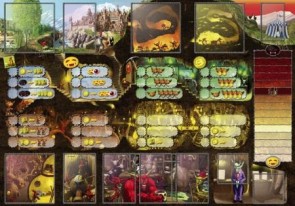 Pictured is a game that doesn't look like any fun to me at all. Images like this are why I wasn't terribly enthusiatic about Vlaada Chvatil's DUNGEON LORDS prior to release. I thought it was going to wind up being more like THROUGH THE AGES, a good game but something very Euro and not at all what I would expect a DUNGEON KEEPER board game to be. The good news is that DUNGEON LORDS is  great, and it's a perfect follow-up to GALAXY TRUCKER. Yes, it's a pretty hardcore Eurogame despite the setting and concept. It even has worker placement, which I kind of hate.

But it also has heart, and plenty of narrative detail. The rulebook goes to comical lengths to explain why in the action selection spaces the first, second, and third spots all get different benefits. If somebody buys a trap, the trap makers get excited and sell the next one with a buy-one-get-one-free deal. There's lots of little details that really sell this game, like the pictures of clerical desks where you rest your minions between each turn. Or that demon down there at the bottom of the picture that looks an awful lot like the DUNGEON KEEPER mascot.

It's definitely a "sim" game, and as such I could give fuck all about winning strategies or competition. It's fun to simply play it, and watch your dungeon thrive or get decimated. It's just that kind of thing.